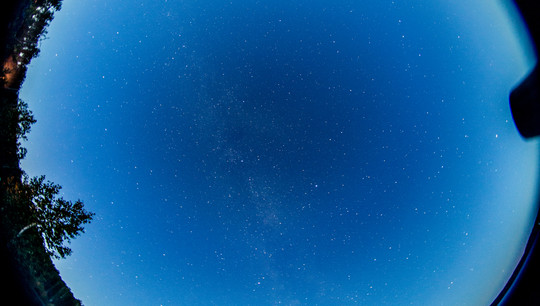 Scientists have suggested that chemical reactions can take place in space way back in the 1950s. Photo: Ilya Safarov.

Scientists have shown the dual role of photochemical processes in the formation of complex organic molecules in specific conditions of the interstellar medium. On the one hand, intense ultraviolet radiation from massive stars aggressively destroys polyatomic molecules, thereby preventing the development of complex organic chemistry in objects that are not protected from radiation. On the other hand, weak secondary ultraviolet radiation stimulates the synthesis of relatively complex organic molecules in those areas of the interstellar medium that are shielded by cosmic dust.

Cosmic dust also acts as a catalyst for chemical reactions leading to the formation of complex molecules. Thus, the solid phase of the interstellar medium, consisting mainly of carbon and silicate compounds, turned out to be not only a unique astrochemical reactor for photosynthesis of organic compounds, but also a place where these compounds survive under harsh conditions.

A detailed description of the "destructive" and "creative" effect of aggressive space conditions on complex organic compounds is presented in a review article on the chemistry of ice mantles of interstellar dust particles in the journal Uspekhi Khimii. In preparing the article, scientists from UrFU, Moscow State University and the Russian Academy of Sciences studied more than 200 sources.

“At present, it is believed that the key chemical reactions leading to the formation of complex molecules in the interstellar medium are the formation of molecular radicals in interstellar ice through photolysis and radiolysis and subsequent reactions between them,” explains co-author of the article, head of the partnership group Max Planck at the laboratory Astrochemistry and Extraterrestrial Physics Institute of Natural Sciences and Mathematics of UrFU Anton Vasyunin. “The complex multi-stage mechanism of these reactions began to be studied not so long ago, and a lot of laboratory, theoretical and observational studies have yet to be done to get a satisfactory understanding of the astrochemistry of interstellar ice.”

Chemical processes in space have not been studied very well. The first theoretical works, the authors of which suggested that there are chemical elements in space, appeared in the 1950s. Until the 1960s, it was believed that only simple molecules (mainly diatomic and triatomic) can exist in the gas phase of the interstellar medium: H2, CO, HCO+, and others. It was assumed that the formation of more complex molecules in space is inefficient due to the prevailing low temperatures, densities and hard UV radiation.

“After the Second World War, many radars remained in Europe, which were transmitted to scientists. Scientists converted them into radio telescopes, and so the tools appeared, thanks to which they began to find molecules in space, ”says Anton Vasyunin. - Since the 1970s, four to five new molecules have been opened annually. The research reached the modern level in the late 1990s and in the 21st century, when precise infrared and radio telescopes and special laboratory facilities appeared. ”

Previously, laboratory studies were carried out mainly in foreign universities. And today, for example, scientists at Moscow State University are conducting experiments on the interaction of ultraviolet radiation and analogues of interstellar ice: they investigate the course of chemical reactions of ice under the influence of ultraviolet radiation. UrFU astronomers also create a laboratory for astrochemical research, which received support from the Russian Ministry of Education and Science. One of the actively developed complex astrochemical models (MONACO), which appeared in the laboratory of astrochemistry and extraterrestrial physics at UrFU, is widely used by Russian and foreign researchers.

Today, scientists around the world have discovered more than 200 organic and inorganic molecules - both diatomic and polyatomic (consisting of more than 12 atoms), as well as radicals, ions, fullerenes. Molecules of methanol, ethanol, dimethyl ether, methyl formate, acetic acid, glycol aldehyde, ethylene glycol, formamide, aminoacetonitrile and others were found in molecular clouds.

“These compounds play an important role in prebiological chemistry, in particular, they are possible precursors of the simplest amino acid - glycine,” says Anton Vasyunin. “Glycine, which is a direct harbinger of the origin of life, for example, was discovered in comets.”

The discovery in the interstellar medium of complex organic and inorganic molecules several decades ago seemed fantastic. Today, equipment allows research - observation in space and experiments in laboratories. At the same time, scientists still do not have a complete understanding of the mechanism of formation of organic matter in space and how it evolves over time (what are the most complex compounds that can form in an interstellar medium). This is one of the modern fundamental problems, the solution of which will allow us to understand how the chemical composition of the Universe changes and the biologically important compounds in the solar system evolve.