Archaeologists Dated the Earliest Pottery in Urals to 7000 BCE
More

Archaeologists Dated the Earliest Pottery in Urals to 7000 BCE

Archaeologists have established the exact dating of the most ancient fragments 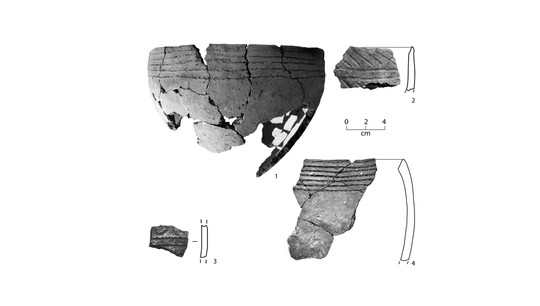 The earliest examples of ancient ceramic crafts in the West Siberian forest-steppes and foothills of the Urals belong to the end of the 7th millennium BCE - this conclusion was made by scientists of the Ural Federal University and the Institute of History and Archeology of the Ural Branch of the Ural Branch of the Russian Academy of Sciences in collaboration with colleagues from the University of Gottingen and Kiel (Germany). The results of the study are presented in the Journal of Archaeological Science.

“At the beginning of this century, archeologists believed that ceramic production first appeared on the Eurasian continent 8 thousand years ago, among early farmers and pastoralists in the Middle East. However, it was later established that in the Far East - in the territory of modern Japan, South Korea, China, Russian Primorye - clay dishes appeared much earlier, 12-15 thousand years ago, during the Late Paleolithic period, when ancient people did not yet know bow and arrow and hunted mammoths with spears, ”says Lyubov Kosinskaya, senior researcher at the problematic research archaeological laboratory of UrFU.

According to one version, climatic changes pushed our distant ancestors to economic specialization, and the Far Eastern communities began to master the manufacture of dishes for the preparation and storage of seafood of plant and animal origin. From the Far East, this tradition spread to the west, at least up to Trans-Baikal region. But how ceramics appeared in Western Siberia and whether the Far Eastern hearth participated in this process - this question remains unresolved. According to researchers, the Urals and Western Siberia are the key regions for understanding the process of distribution of pottery production in Eurasia.

According to Dr. Kosinskaya, it is likely that a certain climatic shift that happened more than 8 thousand years ago caused a certain part of the inhabitants of the forest-steppes to migrate to the north to the taiga forests. This type of pottery is supported by a similar type found in the Upper Priobye, the Baraba forest-steppe, the Ob-Irtysh interfluve, Surgut Priobye, and the Middle Trans-Urals. Later, Middle Eastern innovations came to the Ural-West Siberian region, already covered by pottery technology, which quickly spread north to the taiga. So at the civilizational crossroads of the Urals and Western Siberia, two streams of technology met.

The development of ceramic production indicates a gradual transition of hunters and fishermen from a nomadic to a more settled way of life. During the year, communities moved within their food territory from summer settlements, along the chain of temporary camps to winter settlements, where food stocks (meat, fish, fat) were prepared and concentrated, which required ceramic dishes.

At the same time as pottery and settlements, consisting of stationary dwellings such as dugouts, at the end of the 7th - beginning of the 6th centuries BC e. fortifications appear, enclosed by walls with a rampart and a moat.

“The first, most obvious assumption: fortifications. But who they would have fought in the taiga? The population is small and widely dispersed over fodder territory, the distance between tribes and their settlements is tens and hundreds of kilometers. Protection from the beast? But then why is the bulk of the settlements not strengthened in the same way? In addition, for the hunter, the forest is a native element, animals are not afraid of him,” explains Lyubov Kosinskaya. - Since cult sites were also enclosing ditches at that time, we believe that we have ritual hills in front of us. "These unique cult complexes, found only in the Urals and Western Siberia in the basin of the Tavda River, north of Nizhny Tagil, in the north-west of the Khanty-Mansi Autonomous District, along the Subpolar Urals."

Each time after the rite, scientists believe, the remains in the form of bonfires, ceramics, stone tools were covered with earth. So, over the centuries, cult hills formed layer by layer, and moats protected the sacred space from the outside world.

The problem of archaeologists is in the very small number and volume of fragments of ancient pottery and in the absence of wood or bone products: the acidic podzolic soils of the taiga zone are aggressive to organic matter. Radiocarbon analysis is required to establish the exact dating of tiny fragments. This assistance to Ural scientists in the framework of a joint research program was provided by colleagues from the University of Gottingen and Kiel, the largest scientific centers in Germany. German scientists have their own interest:

“In Western Europe there is only one archaeological culture with ceramic production, owned not by farmers and pastoralists, but by hunters and fishers. These are the Ertebølle tribes that settled on the territory of modern Denmark. The cooperation between Russian and European scientists, which opened after the fall of the Iron Curtain, helped to determine that Ertebølle is not an abnormal North European culture, but is is the western wing of Eurasian cultures, with which Ertebølle has a common social structure, economic practices and technologies. Therefore, German colleagues are interested in continuing joint archaeological, biomolecular and typological studies,” explains Lyubov Kosinskaya.