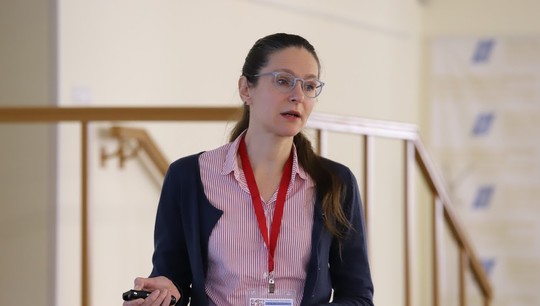 Oksana Golovnya presented the results of the study at an international conference in India. Photo: V. Arashkevich.

Scientists of the Ural Federal University and the Institute of Metal Physics (IPM) of the Ural Branch of the Russian Academy of Sciences described the development of a high-coercive state in high-energy-intensive and high-temperature magnets based on “samarium-cobalt-iron-copper-zirconium” alloys. Researchers have formulated practical guidelines for implementing an effective process for heat treatment of magnets and have taken a step towards obtaining new highly productive magnetic materials. An article on the content the of the work is published in the Journal of Alloys and Compounds.

The material chosen for research is explained by the fact that magnets based on alloys of this type are characterized by a high Curie temperature of about 850° C, while the values ​​of the coercive force at elevated temperatures remain stable.

“Coercive force and residual magnetization (magnetization in a zero field) are the main characteristics of a permanent magnet. Residual induction creates the necessary magnetic field strength around the magnet, and the coercive force prevents the demagnetization of the magnet in external fields. So, for standard commercial sintered magnets, the coercive force values ​​reach about 40 kiloersted, such magnets can be operated at temperatures in the range from 50 to 300 ° C. For comparison: for example, permanent magnets based on the neodymium-iron-boron compound without dysprosium have a coercive force of less than 15 kiloersted, and the low Curie temperature, 300 ° C, limits their scope to temperatures below 120° C,” explains Oksana Golovnya, co-author, head of the Department of magnetism and nanospintronics of the Research Complex of the joint laboratories of the Ural Federal University and the Institute of Physics and Mathematics, Ural Branch of the Russian Academy of Sciences.

The coercive force of high-energy permanent magnets (HEPMs) based on samarium-cobalt-iron-copper-zirconium alloys, as a rule, decreases with increasing temperature. A feature of the magnets of another group, high-temperature permanent magnets (HTSC), is that in some temperature ranges an anomalous phenomenon can be observed when the coercive force rises with increasing temperature. One of the pioneers of this phenomenon and the head of an international project dedicated to its research is Alexander Popov, Leading Researcher at the IFM and the Department of Magnetism and Magnetic Nanomaterials of UrFU.

Magnet groups differ in their compositions: in VEPM, a low content of samarium and a high content of iron, in VTPM, on the contrary. This determines the difference in the values ​​of the coercive force of the magnets. Accordingly, VEPM are usually used at temperatures up to 250 ° C, VTPM - up to 550° C.
In the course of research, scientists at UrFU and IFM compared the features of the formation of a high-coercive state both in high-energy-intensive, saturated with iron and in high-temperature, permanent with samarium-rich, permanent magnets, subjecting them to complex and lengthy heat treatment.

Immediately after sintering, these magnets are homogenized at a temperature of 1150–1200° C, then they are annealed at a temperature of 800–850° C for 10–25 hours, thus forming a cellular nanostructure. The nanostructure consists of Sm2 (Co, Fe) 17 cells about 100 nanometers in size, along the boundaries of which are thin layers (5–10 nanometers each) of the Sm (Co, Cu) 5 phase. However, after the appearance of the necessary nanostructure, the coercive force remains too low. Typically, in order to obtain high values ​​of the coercive force, the magnets slowly, for several days, cool from 800 to 400° C.

In the present study, magnets were annealed at a stepwise decrease in temperature with isothermal exposure at each step: 700, 600, 550, 500, and 400° С. With step annealing, each isothermal annealing is carried out until the growth of coercive force ceases. Since holding at different temperatures affects the coercive force differently, stepwise cooling allows you to track how long it is necessary to anneal at each temperature. In this case, it is possible to obtain magnets with higher properties after a shorter period of time.

Why was such a temperature regime chosen? It is known that during slow cooling in this temperature range there is a redistribution of elements between the phases of the cellular nanostructure. So, today it is accepted that in the center of the interlayers of the Sm (Co, Cu) 5 phase, the content of samarium and copper reaches a maximum, while that of cobalt and iron reaches a minimum. However, the reason for such a redistribution remains unclear, and all attempts at a theoretical interpretation of the nature of the coercive force in magnets taking into account the distribution of elements are highly controversial.

“In the article, we suggest that stresses are the driving force of the redistribution of elements between the phases of the cellular structure. Stresses arise due to differences in the crystal lattice parameters of the coherently conjugated phases Sm (Co, Cu) 5 and Sm2 (Co, Fe) 17. In the conjugation region, the parameters are distorted, that is, deformation of the gratings by the type of compression or tension and corresponding stresses occur. We show how the coercive force changes in HTSC and VEPM during annealing in the temperature range from 830 to 400 ° C,” comments Oksana Golovnia.

According to the results of experiments using x-ray diffractometry and three-dimensional atomic tomography, scientists of the Ural Federal University and the Institute of Physics and Mathematics of the Ural Branch of the Russian Academy of Sciences have shown that the coercive force increases in two groups of magnets differently.

“In high-energy permanent magnets, the main increase in the coercive force and relaxation (decrease) of stresses occur at high temperatures, on the order of 700 ° C, this process is accompanied by intensive enrichment with copper. In high-temperature permanent magnets, the coercive force monotonically increases over the entire temperature range of slow cooling from 700 to 400 ° C. In this case, in a phase of type Sm (Co, Cu) 5 at temperatures close to the Curie temperature (about 550 ° C), an anomaly in the growth of the coercive force is observed: interfacial stresses increase, while the redistribution of elements accelerates, which differs from the generally accepted one and is characterized by the formation of additional layers Sm (Co, Cu) 5 phases with an increased copper content,” describes Oksana Golovnya.

The work of scientists from the Ural Federal University and the Institute of Metal Physics, Ural Branch of the Russian Academy of Sciences has obvious applied value: the obtained results formed the basis of practical recommendations - how to cool high-energy and high-temperature magnets as efficiently as possible in terms of time and energy consumption. In addition, we investigated a wide range of compositions that are actually in demand on the market and have a close perspective of industrial applications.

“The nanostructure of the studied magnets is unique, interlayers are of fundamental importance, since they underlie the formation of a highly coercive state. An accurate understanding of the reasons for the appearance of high coercive properties will give impetus to the production of new magnetic materials that we have not seen since the revolutionary discovery of the neodymium-iron-boron compound in the 80s of the last century," explains Oksana Golovnya.

3D atomic tomography of magnets is one of the most modern methods for studying nano-objects. Held at the Indian Institute of Technology Madras (the oldest university, one of the leading universities in India) in the framework of the international BRICS project, implemented jointly by Russia, India and China. An article by a group of scientists from the Ural Federal University and the Institute of Physics and Mathematics of the Ural Branch of the Russian Academy of Sciences was written on the basis of an oral report presented by Oksana Golovnya in India at the international conference Ismanam-2019 - the 26th international symposium on metastable, amorphous and nanostructured materials.