Pandemic Will Revolutionize Economic Models of Universities Around the World
More

Pandemic Will Revolutionize Economic Models of Universities Around the World 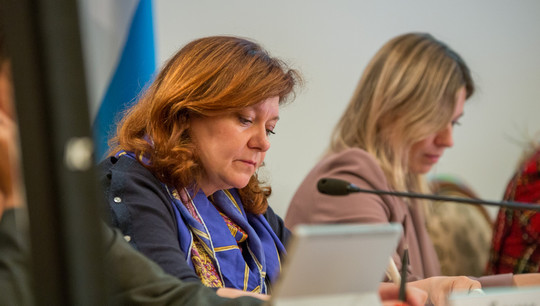 According to Elena Chernyshkova, because of the coronavirus, student mobility and the income structure of universities will change, and inequality will increase. Photo: Gleb Eremenko.

Elena Chernyshkova, Head of the Center for Philanthropy Studies and Social Business Programs at GSEM UrFU, made a presentation on the difficulties that universities will encounter during the period of corona-crisis. The expert voiced the trends at the conference 'Economic Policies of the Regions Aimed at Overcoming the Consequences of the Pandemic'.

“I see three big trends that are happening right now. First, the increase in inequality. The principle “the rich get richer and the poor get poorer” is also characteristic of the educational sphere: according to previous studies, we saw that with the development of universities and technologies there was a gap between rich and not rich universities. And before the crisis, many experts called increasing inequality as the main trend, but during the coronavirus period this trend intensifies,” says Prof. Chernyshkova.

The second serious obstacle universities will face is the economic model transformation: the income structure will change in the next academic year, the expert believes. Today, the income items that universities depend on the most are governmental subsidies, as well as incomes that universities receive in exchange for research: grants, orders from companies, targeted donations for this particular area, as well as ongoing donations, income from endowment capital and tuition fees. In the next school year, those two points may undergo significant changes.

“It is not obvious to all parents and students that the former cost of education should be maintained. In addition, someone has decreased solvency,” says Prof. Elena Chernyshkova. - In some countries, education ministries are thinking about how to support universities. Recently, the Minister of Education of Kazakhstan said that they have a separate targeted program to support paid students so that they can pay for tuition and not ruin the economy of universities. In Russia, from the ministry’s side, I haven’t heard how the state is going to support universities in this difficult economic situation.”

Student mobility will overcome changes significantly. According to Chernyshkova, 60% of students who were planning to leave to study in another city or abroad now would tend to quit such plans. Thus, regional universities will be able to recruit more talent. On the other hand, according to Quacquarelli Symonds' estimates, the overall flow of international students will decrease significantly.

“The income that our universities, especially the stronger ones, are used to getting from visiting foreigners, will drop drastically. There are also risks of restructuring and lower income from fundraising, ”the expert is sure.

Elena Chernyshkova spoke about the difficulties faced by universities during the round table 'Medium and Long-Term Consequences of the Crisis for the Social Development of Different Types of Cities and Regions: Single-industry Towns, Millionaires'. The discussion is one of the events of the School of Economic Analysis, which takes place on May 18–21 in an online format. A full discussion (only in Russian) is available on the the Association of Independent Economic Analysis Centers' YouTube channel.