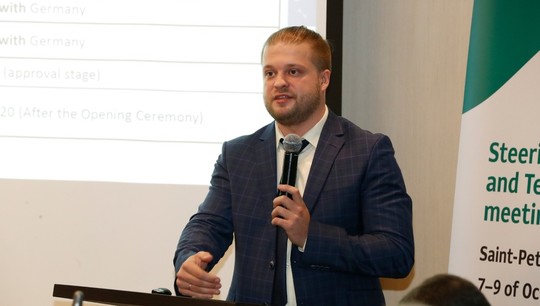 Stanislav Yeroshenko, senior lecturer at the Ural Power Engineering Institute (UrFU), became the first representative of Russia to be awarded the CIGRE Prize - the International Council for Large High Voltage Electrical Systems - in the entire history of the youth section.

The award ceremony will take place at the 48th session of CIGRE in Paris, which will take place on August 20-25. The decision was made by the management committee of the association.

“This is a significant event not only for me, but for the entire Russian National Committee of CIGRE,” - Stanislav Yeroshenko shared his impressions. - This is the first time in history when Russia became the owner of a prize awarded for the first time. I am proud to represent the scientific community of the university ”.

Among the nominees are also researchers from Germany, Australia and the USA. The selection of candidates was based on their contribution and active participation in working groups, national research committees, national or international youth associations of the organization.

“Monitoring of the activity of CIGRE members is carried out by their work in research committees, publication and research activities, as well as pedagogical activities, the number of public speeches at international events, the organization of specialized events with young people,” adds Yeroshenko.

Stanislav is a senior lecturer at the Ural Power Engineering Institute (UrFU). In addition to research in the field of renewable energy sources and the use of artificial intelligence methods for industry tasks, he oversees the activities of the CIGRE Russian National Committee at UrFU. Since 2018, he has been involved in the international work of CIGRE's Future Networks as an official representative from Russia. In addition, he is an international representative of the CIGRE research committee “The impact of energy on the environment”.

CIGRE was founded in 1921 in France and today is one of the most authoritative scientific and technical associations, which unites scientists and energy specialists from all over the world and has a strong influence on the formation of the development strategy of the industry in many countries.

The Next Generation Network is an international youth movement in the energy sector. Today there are more than 20 national associations - committees with youth sections, which are engaged in popularizing science and industry among young people: young professionals, students of specialized universities around the world. Members of the youth movement participate in scientific conferences, work in the working groups of the International Council on Large Energy Systems, and implement joint projects on the basis of one of the largest non-profit industry organizations in the world.