The material is suitable for use in various cellular standards, including 4G and 5G 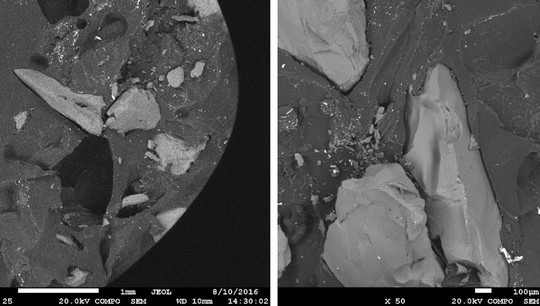 Coarse grains of corundum with disseminations of smaller particles are clearly visible on the samples. Photo: Ceramics International.

An international group of scientists from the South Ural State University (SUSU, Chelyabinsk), the Ural Federal University and the National Academy of Sciences of Belarus have developed a highly efficient composite intended for combined electromagnetic and mechanical protection, and studied its characteristics in detail. The researchers published an article about this in the authoritative journal Ceramics International (Great Britain).

The material developed within the walls of SUSU is made of a highly elastic and resilient synthetic polyurethane polymer, reinforced with corundum grains - crystalline aluminum oxide. According to the head of the research team, senior researcher of the Department of Design and Production of Radio Equipment, SUSU Denis Klygach, polyurethane ensures the flexibility of the material obtained, and corundum ensures its strength. It is also important that both polyurethane and corundum are available and inexpensive. In addition, corundum has the ability to reduce the amplitude of electromagnetic waves, in other words, to extinguish electromagnetic radiation. This feature determined the directions of practical application of the created composite.

The composite created at SUSU is applicable to weaken the effect of electromagnetic radiation on the body, to improve the characteristics of radio engineering devices, including those related to cellular communications. Measurements have shown that the reflection coefficient of electromagnetic waves in the resulting composite is stable over a wide frequency range, from 1 to 12 GHz, and is −15 dB. This means the material is suitable for use in a variety of cellular standards, including the most modern 4G and 5G.

The study of the key electrodynamic characteristics of the polymer - dielectric constant, reflection coefficients and transmission of electromagnetic waves - took place in the laboratory of electromagnetic compatibility of the Ural Federal University.

“Our laboratory is equipped with the most advanced equipment and uses unique techniques. This allows us to measure at the highest world standards. Thanks to this, as well as the long-term cooperation of our universities, we are able to jointly present not just models and hypotheses, but experimentally confirmed, accurate knowledge of the properties of the materials being created, ”comments Nikolai Knyazev, head of the Ural Federal University electromagnetic compatibility laboratory.

Part of the work within the framework of the project on the development of a composite based on polyurethane and corundum was supported by the Russian Science Foundation. And the direction of research itself is among the priorities of the Ural Interregional Research and Education center of the world level "Advanced Industrial Technologies and Materials", which is currently being created by the joint efforts of Ural Federal University, SUSU, other regional higher educational institutions, the Ural branch of the Russian Academy of Sciences and industrial corporations.