UrFU and Sathyabama Institute scientists have introduced a facile chemical method for preparation of highly stable perovskite materials in large-scale for commercial purpose. 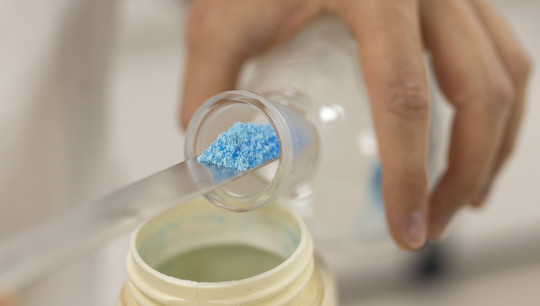 Experts from UrFU and the Sathyabama Institute of Science and Technology have developed a powder form of perovskites. Photo: Ilya Safarov.

The world's first method of industrial synthesis of highly stable perovskites was developed by scientists from the Department of Magnetism and Magnetic Nanomaterials of the Ural Federal University, together with colleagues from India. This opens up the possibility of effective use of these substances, recognized by Science as a breakthrough material, in energy and electronics, according to RIA News Agency. The results are published in the journal Materials Science in Semiconductor Processing.

Perovskites are a class of minerals with a pseudo-cubic crystal structure. Since 2012, according to scientists, perovskites have been actively studied as an extremely promising material for a number of areas, especially for solar energy.

Today, the efficiency of perovskite elements is already about 25%, which is comparable to semiconductors, and the technology of their manufacture is much simpler. Plus, they can be placed on any flexible backing - from a sheet of paper to clothing.

However, the practical application of perovskites is still limited, since the existing production methods do not provide the required material stability. At room temperature, perovskite films degrade within a few hours.

The powder form of perovskites, developed by specialists from UrFU and the Institute of Science and Technology of Satyabama (India), showed high stability, sufficient for technical use. The properties of the material, according to scientists, have not changed over a year of observations.

“In fact, we are the first to find a way to produce perovskites on a large scale. An increase in the stability of the substance is provided due to high crystallinity and a decrease in grain boundaries. This opens up great opportunities for the full-fledged use of such materials in the future, ”said Razhesh Kumar Manavalan, co-author of the study, research associate of the Department of Magnetism and Magnetic Nanomaterials of the UrFU.

By chemical treatment with a high-temperature anti-solvent method, the scientists managed to synthesize a whole series of perovskite powders: MAPbI3, MAPbBr3, FAPbI3, FAPbBr3, CsPbI3, and CsPbBr3. As the authors explained, this production method is very simple and does not take much time.

In addition, in the course of the study, Ural Federal University specialists studied the structural, optical, and morphological properties of the obtained substances; for the first time, the temperature-dependent phase transition of perovskites was studied.

In the future, the research team plans to improve the technology for commercial implementation.