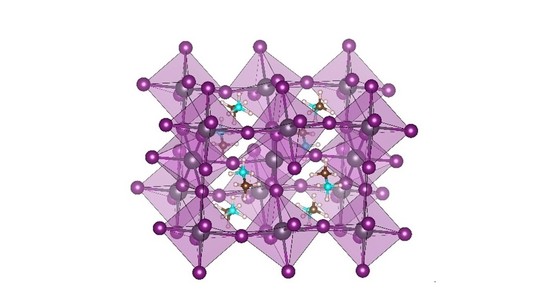 A team of scientists from the Russian Academy of Sciences, the Skolkovo Institute of Science and Technology and the Ural Federal University investigated complex lead halide perovskites that can be used as absorbent materials in solar cells. The article was published in the journal Solar Energy Materials and Solar Cells.

In the role of the anion in these perovskite-like structures, scientists used halogens - iodine, bromine and their mixtures, as the first cation - an organic compound - methylammonium, formamidinium, as well as cesium, as the second cation - lead.

As the associate professor of the Department of Electrophysics of the Ural Federal University, a member of the research team and co-author of the article Ivan Zhidkov, explains, the researchers set several tasks. First, to establish what processes occur during heating of materials and their thermal degradation, in order to avoid undesirable consequences in the future, including the formation of environmentally harmful decomposition products. Secondly, to increase the stability of solar cells.

“To determine the thermal stability of various lead halides, we heated them to temperatures that work for solar cells - 90 ℃, and observed what components the halides decomposed into under thermal stress. It turned out that the least stable, the most easily decomposed into volatile components are methylammonium halides. Inorganic materials using cesium, on the other hand, have exceptional compositional stability, since they contain non-volatile compounds of cesium with bromine and iodine, and there are no readily decomposing organic cations, ”says Ivan Zhidkov.

Scientists see solutions, in particular, in thoroughly sealing the absorber layer, stabilizing the organic cation with a certain additive, or replacing it with a more environmentally friendly analogue, albeit less effective. Methods for stabilizing perovskites are presented in The Journal Physical Chemistry Letters.

“We added to one of the perovskites, CH3NH3PbI3, the organic compound polyvinylcarbazole, the result is a cell that has an 18.7% efficiency in converting sunlight into energy and 500 hours longer. We do not stop there: for example, it has been noticed that the best combination of efficiency and thermal stability is given by mixtures of bromine and iodine in various combinations. Another challenge is either to completely eliminate the use of toxic lead in our materials, or to reduce its presence to an acceptable level. The ultimate goal is the creation of highly productive, simple and inexpensive to manufacture, durable solar cells, the energy of which will be several times and ten times cheaper than that obtained with the help of silicon batteries, ”says Ivan Zhidkov.

Such batteries can be used not only on Earth, but also in space due to their high radiation stability. To do this, it will be necessary to significantly increase the thermal stability of materials: this characteristic is especially important under vacuum conditions, in the absence of conditions for heat removal.

The research is carried out thanks to grants from the Russian Science Foundation - under the presidential program to support young scientists (No. 17-72-10044) and "Research by world-class scientific laboratories in the framework of the implementation of the priorities of scientific and technological development of the Russian Federation" (No. 19-73-30020).

Over the past decade, the so-called printed electronics has been developing - when a chemical solution is applied to a substrate using printing equipment, as a result of which layers of materials of a given composition and geometry are formed, applied to the production of solar cells - layers of perovskites.

Perovskites are a class of materials with a structure similar to that of calcium titanate, where one anion — a negatively charged ion — and two cations, a positively charged ion are present. The anion, most often an oxidizing agent from the halogen series, replaces the oxygen position, one of the cations replaces the calcium position, and the other replaces titanium.The production of perovskite solar cells is much cheaper and more environmentally friendly, and their efficiency in recent years has grown from 3% to 25.2%, which is comparable to the efficiency of silicon batteries. In the future, according to scientists, the efficiency of perovskite solar cells should reach 36%.The disadvantage of such batteries is their fragility. The cheap-to-manufacture cation from widely distributed and available organic matter degrades so quickly that battery life is limited to about 2,000 hours, or less than 3 months. For comparison: silicon batteries last about 25 years without noticeable losses.The need to increase the expiration date of perovskite solar cells explains the relevance of studies of the internal thermal stability of lead halide perovskites, which are used in solar cells as absorbent materials.