The monograph is written and published in Russian 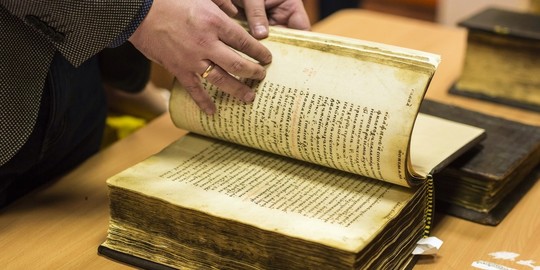 The first volume of a four-volume edition was published, devoted to the characteristics of the primitive fortified settlements of the Stone, Bronze and Early Iron Ages of the forest belt of the Ural-West Siberian region. Senior Researcher at the Center for Archaeological Research Ural Institute of Humanities at Ural Federal University, Dr. Victor Aleksandrovich Borzunov published the monograph "Ancient fortifications of the forest belt of the Urals and Western Siberia: Neolithic and Eneolithic" in the publishing house of the Ural University. The study was supported by the RFBR grant No. 18-09-40011 "The Urals and Western Siberia in an archaeological retrospective: the most important discoveries, rhythms, phenomena and paradoxes of development" (scientific supervisor of the grant: Doctor of Historical Sciences O. Korochkova).

The main goal of the four-volume edition is to create a general concept of the genesis and development of the most ancient fortified settlements in the forest belt of the Urals and Western Siberia, the northernmost regions of Eurasia and the world, where such objects are recorded.

Based on the study of 1,054 archaeological sites of the primitive era of the forest belt of the Urals and Western Siberia, as well as some adjacent taiga and forest-steppe territories, the areas of distribution of original artificially and naturally protected settlement objects - cape and coastal settlements, large timber-earth fortified dwellings, mountain "fortresses" , bastion fortifications, isolated "island" villages.

The first volume examines the natural and climatic conditions, social prerequisites and reasons for the genesis of northern fortifications, the fate and place of "primitive taiga fortresses" in the general system of origin and development of the oldest "fortified villages", "quasi-cities" and "proto-cities" of the Old World. An innovative concept of the phased distribution of the idea of ​​a fortified settlement from the Middle East region and adjacent areas is proposed. Seven "waves" of the spread of fortified objects in Eurasia are outlined in the era of primitiveness and the beginning of class formations (IX / VIII millennium BC - III / V centuries AD).

The most ancient fortifications and their prototypes of the North of Eurasia - settlement objects of the local Neolithic and Eneolithic (VI-III millennium BC) are analyzed, their individual and general characteristics are presented. The peculiarity of this region is the genesis of fortified centers in the societies of primitive taiga fishermen-hunter-gatherers who are not familiar with the production economy, while regardless of the "town-planning" traditions of the advanced societies of the most ancient farmers and pastoralists of the South of Eurasia.

The presented materials are unique and are not yet available in generalizing academic publications and educational archaeological literature.

To this is attached a section in English about fortified settlements of the Neolithic and Eneolithic of the taiga of the Ob region with a table of radiocarbon dates for these monuments, translated by Ph.D. Sci., PhD I.V. Chechushkov.

The book is intended for specialists in the history of Russia, domestic and foreign archaeologists, students of history faculties, local historians, history lovers.