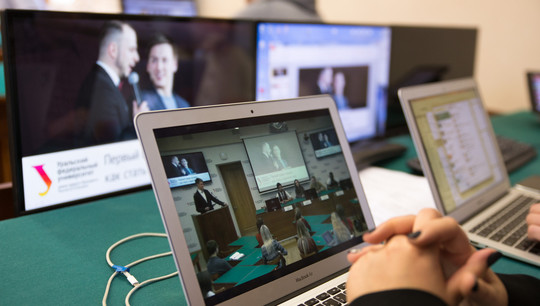 In the year of its 100th anniversary, the Ural Federal University together with the National Research Technological University "MISiS" held an international scientific conference EdCrunch Ural on September 29 and 30. This year, it was dedicated to the digital transformation of universities and for the first time was held entirely online. The conference was attended by about 2000 people from more than 60 countries.

At the opening, the participants were greeted by the rector of UrFU Victor Koksharov. According to him, universities need to unite in consortia with the participation of technology companies to jointly develop and replicate digital services for universities, as well as to create practice-oriented educational content.

The plenary sessions and sections discussed the role of teachers, the use of big data in teaching, the use of educational platforms and the management of universities in the context of digital transformation.

“Gradually, the mission of the university is changing towards work in the knowledge economy. This means that the university will change and move forward not only along one line (how well it teaches), but also on how it can build new knowledge and how it can turn this knowledge into real changes in life around us - both technologically and organizationally. That is, education should be based on what kind of innovative, research program a particular university has," said Andrey Volkov, scientific director of the Skolkovo Moscow School of Management.

Vasily Tretyakov, Advisor to the General Director of University 20.35, spoke at the plenary session of the conference about what should change in a student's life as a result of the digital transformation of the university. Marina Rakova, Vice President of Sberbank, demonstrated Sberbank's digital educational platform.

A lot of attention at the conference was paid to the situation with EdTech projects on the market. At the industrial section of the company Sberbank, Yandex, Skyeng, SKB Kontur, Urait talked about their programs of interaction with universities and successful cases in this direction. Oleg Artyugin made a presentation on how Sberbank participates in the formation of the Ural Federal District. In his opinion, active participation in educational initiatives allows to achieve synergy between business and education and make students more competitive.

“70% of universities will create their own internal electronic system. There are several dozen more EdTeсh companies, such as us, that will also do something of their own. At some point, we will see many digital platforms collecting digital footprints from students. We will find ourselves in a situation where we will have a huge amount of data, but it will be impossible to glue them together, even if we introduce some kind of general authorization. This is neither good nor bad, we just need to go through this stage. The second stage is the emergence of a universal digital profile. Who exactly will create it, you can guess for a long time, but the main thing is that one or several systems will definitely appear, because we need such a unified system for measuring a person's progress as he moves along the educational track,” says Alexander Laryanovsky, managing partner of the Skyeng school.

Individual educational trajectories at the university is another important topic that was raised at the conference. The experience of implementing IOT was shared by MISiS, Tyumen State University and DSTU. In addition, UrFU and Custis, which sponsored the conference, presented their case on the use of the Modeus platform.

Two sections in English were very popular. The participants in the International Education section (which brought together representatives from 61 countries) shared specific cases of digitalization of higher education, discussed the labor market, migration of talents, strategies for the development of online learning, marketing in education. Mani Klemencic, a lecturer in sociology at Harvard University, spoke about student-centered learning. It represents a paradigm shift in higher education, shifting the emphasis from what educators teach to what students learn. The approach is based on the theory of student free will, which assumes the ability of students to take responsibility for their learning.

The section “Digital Inclusive Culture” was attended by about 250 people from more than 20 countries. It discussed the experience of holding inclusive events in a hybrid format, as well as the program of additional education "The Phenomenon of Extrability: Practices of Inclusive Interaction".

Informational support for the EdCrunch Ural conference was provided by the Association of Eastern European Universities, the Russia.Study portal, Times Higher Education and the National Research Technological University MISiS.