Chemists Look for Ways of Temperature Decreasing for Fuel Cells

Researchers Tarasova and Animitsa, and research engineer Galisheva published a paper in Journal of Raman spectroscopy 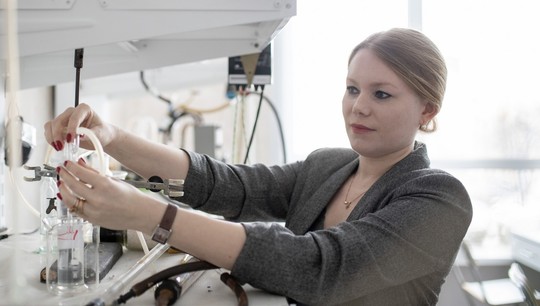 The results of the work of the scientific group, which includes Natalia Tarasova, bring closer the moment when solid oxide fuel cells will become widespread. Photo: Ilya Safarov.

Scientists from the Ural Federal University facilitated oxygen-ion and proton transport in BaLaInO4 with the help of impurities. This compound is promising as an electrolyte for solid oxide fuel cells. The study is published in the Journal of Raman spectroscopy. This work was supported by a grant from the President of the Russian Federation for young scientists (No. MK-24.2019.3).

Fuel cells are devices that convert fuel energy into electrical energy through a chemical reaction. They can be used in car engines and in the space industry. Solid oxide fuel cells are promising. Complex oxide materials act as an electrolyte that conducts electric current. The main difficulty lies in the fact that solid oxide fuel cells operate at temperatures of 700–1000 ° C, which makes them difficult to use. Therefore, scientists are looking for ways to lower the temperature at which these devices operate. One of the options may be the use of medium-temperature proton conductors operating at 300–500 ° C as an electrolyte.

The effectiveness of their use depends on the structure of the substance. One of the potentially suitable compounds are compounds based on BaLaInO4 (barium, lanthanum, and indium with oxygen). Scientists investigated the effect of doping (addition of impurities) on the structure of compounds based on BaLaInO4. Atoms of such chemical elements as strontium, barium, titanium and niobium were used as dopants. The substances were obtained in the course of solid-phase synthesis, that is, with successive grinding of the powders of the starting reagents and a stepwise increase in temperature. First, the researchers confirmed the single-phase nature of the compounds obtained by powder X-ray diffraction. This approach is based on the diffraction (deflection) of X-rays on the three-dimensional crystal lattice of the substance under study. In addition, the authors found that all samples have a rhombic structure.

To study the local structure, the researchers resorted to Raman spectroscopy (Raman spectroscopy). The essence of the method is that a beam with a certain wavelength is passed through a sample of the investigated substance, which is scattered upon contact with the sample. Then the received rays are collected in one beam with the help of a lens, amplified and directed to a detector, with the help of which their frequency is fixed. So scientists have confirmed that doping leads to the appearance of defects in the crystal lattice - oxygen vacancies are formed (the absence of oxygen in the lattice in the structural position) and interstitial oxygen (oxygen atom in the "additional" position). The authors of the study also found that the introduction of impurities leads to the expansion of the unit cell, while the structure is less distorted. As a result, the transport of oxygen ions and protons is facilitated, and the ionic conductivity is increased. At the same time, the properties of the substance as an electrolytic material are improved.

“We investigated the effect of various types of doping on the local structure and transport properties of BaLaInO4. The results of our work significantly expand the understanding of how particles move in such materials, and bring closer the moment when solid oxide fuel cells can become widespread, ”said Natalia Tarasova, associate professor of the Department of Physical and Inorganic Chemistry of the UrFU.