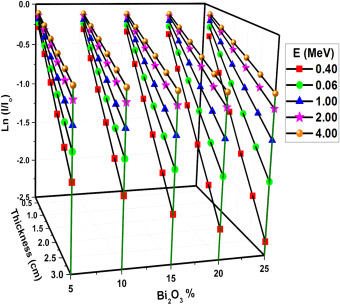 Gamma transmission factors of the glass samples against glass thickness. Fig. 3 from the article.

BZBB glasses contain compounds of elements with a high atomic number and are used to protect personnel from radiation at nuclear power and industrial facilities, in laboratories and medical centers. Scientists from UrFU investigated the radiation resistance of glass of the promising composition xBi2O3-30B2O3- (65-x) ZnO-5BaO. According to them, experiments have shown excellent shielding properties of such glasses: mass attenuation coefficient, free path length, tenfold attenuation layer and their other radiation characteristics exceed the parameters of materials traditionally used in radiation protection - concrete and lead.

"Our material turned out to be three times more efficient at absorbing photon radiation than similar 'heavy' glasses common today. Accordingly, for a comparable task, it can be three times thinner. This provides a number of advantages, including significant savings," - said Jr. Researcher Maria Pyshkina, a researcher Department of Experimental Physics, UrFU.

The impact of ionizing radiation, as explained by the scientists of UrFU, is a random process, therefore, during the development, the simulation of random processes by the Monte Carlo method, as well as other methods of computer modeling, was used. The research team intends to continue researching the radiation properties of new materials to develop components for radiation protection systems.