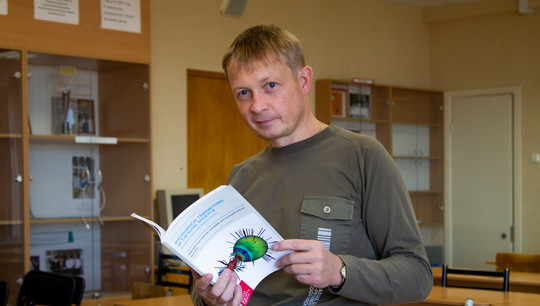 Dmitry Alexandrov has been a guest editor of The European Physical Journal for the second year. Photo: Anna Marinovich.

Faculty members of the Department of Theoretical and Mathematical Physics of the Ural Federal University Dr. Dmitry Alexandrov and Dr. Andrey Zubarev have prepared a special issue of The European Physical Journal Special Topics. The articles of the thematic issue are devoted to six scientific areas: dendritic growth, nucleation and growth of crystals, two-phase zone, nonequilibrium structuring in magnetic heterogeneous systems, theoretical modeling of magnetic hyperthermia, transport and nonequilibrium structures in biological systems.

"Structural-phase and nonlinear effects strongly influence the dynamic behavior of many heterogeneous systems, determine their internal context, composition, morphology and properties. These effects arise as a result of various driving forces or external influences and require special theoretical consideration and computer modeling to describe and predict metastable and nonequilibrium transformations in heterogeneous materials, "explains Andrei Zubarev.

The articles of this issue describe such phenomena as the formation of a microstructure (for example, monocrystalline or polycrystalline) during dendritic crystallization with various supercooling, crystal size distribution in metastable liquids, magnetic hyperthermia in tumor cells, and others.

"You can also mention the flow of fluid in the coronary vessels that occur behind the stenoses," says Dmitry Alexandrov. - These and other similar problems attract the attention of many researchers from all over the world. Teams from Germany, Great Britain, France, Morocco, Egypt and Russia spoke about their scientific research on these topics."

Each issue of The European Physical Journal Special Topics is dedicated to a specific topic of interest. The journal covers the full spectrum of pure and applied physics, including related subjects such as materials science, physical biology, physical chemistry, and complex systems, with a focus on interdisciplinary topics in physics and related fields.