The work was published in The European Physical Journal Special Topics 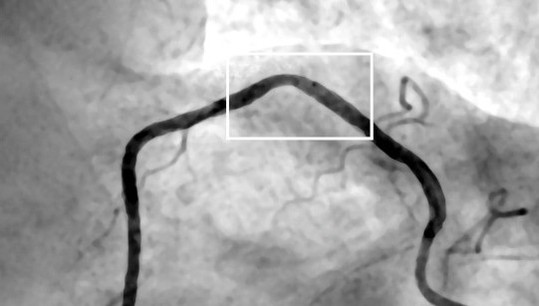 Angiographic image of a real patient's artery. The rectangle is the local area with stenosis that scientists have investigated. Photo: Ivan Bessonov.

A team of scientists has developed a mathematical model that will help diagnose and treat ischemic heart disease caused by stenosis (narrowing of the lumen) of the coronary artery (supplies oxygenated blood to the heart muscle). Model calculations make it possible to obtain detailed hemodynamic characteristics in the artery: blood flow velocity, pressure, blood viscosity, and the value of the fractional blood flow reserve. The model's accurate data will help clinicians decide when surgery is needed and the best treatment options. Now physicians are guided mainly by instrumental diagnostic methods and personal experience.

The research results are presented in The European Physical Journal Special Topics.

"It is known that the cause of cardiac diseases is the growth of stenotic plaques, which block the blood flow in the vessels. If the plaque blocks the blood flow in a critical way, that is, the area of ​​the lumen becomes less than the allowable one, then irreversible consequences may begin, and the person must be rescued by surgery. But studies have also shown that if stenting is performed before the plaque grows to a critical size, it will lead to certain risks to the body. Our idea is to control the degree of occlusion of the blood vessel and precisely determine the time required for the operation," says Dr. Andrei Zubarev, professor of the Department of Theoretical and Mathematical Physics of the UrFU.

At the first stage of the project, scientists are working to create the most reliable model. In compiling it, they used the real results of a study of invasive coronary angiography in patients with coronary heart disease. Thus, they managed to simulate blood flow under conditions as close as possible to real medical diagnostics.

"Based on the data from invasive coronary angiography, we developed a 3D geometric model of the stenotic artery. Using the data on the pressure pulsation at the entrance to the studied area of ​​the artery, we carried out hemodynamic modeling and obtained the results of blood flow for a complete cardiocycle. These results showed that behind the stenosis, a low-speed vortex flow is formed, and a region of high-viscosity blood appears, where the viscosity increases up to two times," explains Ilya Starodumov, junior researcher at the laboratory of multiscale mathematical modeling of the Ural Federal University.

In addition, he said, due to the influence of the walls of the arteries, the flow becomes significantly asymmetric. This suggests that there is no alternative to 3D modeling for the study of complex areas of real vessels.

"Modeling of the artery after the proposed revascularization shows the absence of a vortex and significantly more uniform flows in the area under consideration, while the flow rate slows down to 30%. Thus, hemodynamics in the area of ​​stenosis can differ significantly from the usual dynamics of blood in healthy parts of the artery," explains Ilya Starodumov.

The next step is to launch magnetic nanoparticles with a diameter of 15-20 nanometers into the bloodstream, which will make it possible to "visualize" the processes in the vessels. The idea to introduce magnetic particles belongs to Dr. Felix Blyakhman, a professor at the Ural State Medical University.