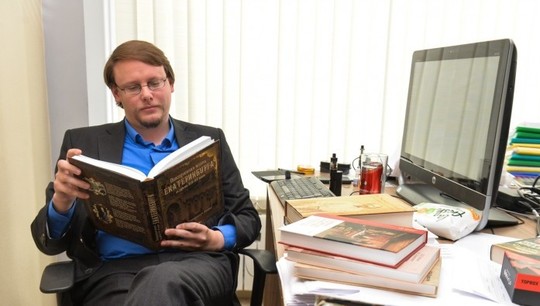 A team of researchers has prepared a monograph "The Concepts of Conflict and Consent in Russian Social Thought and Practice (XVIII - XXI Centuries)". The book will be published at the end of the year and includes nine chapters written by historians, philosophers and specialists in religious matters. Not only employees of the Ural Federal University, but also representatives of foreign scientific centers worked on its creation.

As Dr. James White (Senior researcher at the UrFU Laboratory of Traditional Archeography) told, each section is devoted to an in-depth study of a specific case.

For example, professor at the University of Southampton (UK) George Gilbert prepared a chapter on how Russian social democracy created its own canon of "martyrdom" during the 1905 revolution.

Professor of the University of Tartu (Estonia) Alison Kolosova wrote a chapter on how the well-known concept of "collegiality" was claimed by Chuvash Orthodox Christians during the years of conflicts that were tearing apart the church at the beginning of the 20th century.

The monograph as a whole is devoted to a variety of approaches to the phenomenon of conflict and the development of ways to overcome it, to achieve agreement. Most often we are talking about conflicts within large structures - states, religious communities. However, in the final analysis, the parties to the conflicts on the pages of the book are not so much the state or the church as people who have certain ideas about what is a conflict and what is consent, and who put them into practice.

Dr. Konstantin Bugrov, professor of the Department of Russian History at UrFU, talks about the ideas of the Soviet leadership about war and peace in the 1920s - 1930s, and associate professor of this department,

Yekaterina Kamenskaya, talks about the press reaction to the Soviet-Chinese conflict of the 1960s.

The chapter, which was prepared by Elena Stepanova, Chief Researcher of the Laboratory for Comparative Studies of Tolerance and Recognition, is devoted to the religious ideas of Leo Tolstoy, and the head of the senior researcher at the Laboratory of Traditional Archeography of the Ural Federal University, Dmitry Timofeev, is devoted to the problem of consent in litigation for the release of serfs of the early 19th century.

The chapter, authored by Sergei Sokolov, Head of the Department of Russian History of the UrFU, is devoted to the views of Russian historians of the Age of Enlightenment about civilization and barbarism.

Aleksey Loginov, Associate Professor of the Department of Social Philosophy of the UrFU, described the problems of developing an urgent concept of tolerance that works in the modern world.

"The work of the project manager, James White, is devoted to a very interesting topic - the conflict that broke out on the small island of Ruhnu in the Gulf of Riga. The local population - a tiny community of Estonian Swedes - came into conflict with their pastor and, in order to get rid of him, played masterfully in the competition for flock between the Lutheran and Orthodox churches," says Sergei Sokolov.

The monograph is the final work on the project "The Concept of Conflict and Harmony in Russian Social Thought in the Context of European Approaches (XVIII - XX centuries)" (supervisor - Church history specialist James White).

The project was supported in 2018 by the Russian Science Foundation (No. 18-18-00216). The scientific problem to be solved by the research is the conceptualization of conflict and harmony by Russian and Soviet socio-political thinkers of the New and Modern times (XVIII - XX centuries). Conflict refers to clashes between different groups of people: religious, social, economic and national conflicts are the main four types of clashes of this kind.

The concept of a conflict includes the identification of the opposing sides, the causes of the conflict, the modes of its course and the assessment of possible outcomes. A situation in which there is no conflict between groups of people can be called agreement. The solution to a scientific problem involves the study of conceptual representations of conflict and harmony in European social thought. Chronologically, the project covers the period from the beginning of the Westernization of Russian social thought at the turn of the 17th - 18th centuries to the collapse of the socialist system in 1991.