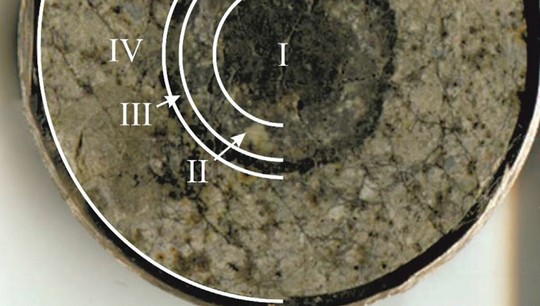 A shock experiment was conducted for the study. Illustration: Razilya Muftakhetdinova.

The Ural Federal University has experimentally simulated the process of breccia formation in the famous Chelyabinsk meteorite. An article about the experiment and its results was published in the journal Planetary and Space Science.

“The significance of the model is that, having connected all the structural elements of the meteorite and the processes outside and inside it, we showed under what conditions, under what loads, with a high degree of probability, its substance was 'formed', explains the head of the Extra Terra Consortium scientific laboratory. Professor of UrFU Viktor Grokhovsky. In February 2013, the UrFU meteorite expedition, led by Prof. Dr. Viktor Grokhovsky for more than 30 years, was the first to investigate fragments of the Chelyabinsk meteorite.

According to Dr. Grokhovsky, at first samples of light or dark lithology fell into the hands of the meteorite expedition, however, all types of lithology were present in the meteorite fragment raised from Lake Chebarkul - light, dark, shock melt. Scientists have wondered about the nature of the phenomenon. In the shock experiment carried out at the Russian Federal Nuclear Center - All-Russian Scientific Research Institute of Technical Physics (Snezhinsk, Chelyabinsk Region), it was proved that changes in meteorite lithology occurring in space could be a consequence of one shock event (it is believed that the parent body of the meteorite , a large asteroid with an age of about 4.5 billion years, “survived” four or eight impact events), and all types of lithologies observed in separate fragments of the Chelyabinsk meteor shower could have been formed by a shock event from the same source material. This is the first time such experimental evidence has been obtained.

“By the composition and structure of metals and silicates in the material of the meteorite, we have established that it lay deep in the parent asteroid. The celestial body has undergone shock. When an asteroid collides with another space object in the vastness of the solar system, a melt of rocks has formed. The melt areas in the Chelyabinsk meteorite are gray in color; they include light lithology and the dark lithology bordering it. Dark lithology is those fragments that got into the melt and partially melted, remaining in the composition of the parent asteroid under the influence of its gravity. This is similar to what happens in impact craters both on Earth and on airless asteroids,” says Viktor Grokhovsky.

The fact that a meteorite consists of a substance that has passed from a molten liquid state to a cooled solid is also indicated by shrinkage cracks that form when the substance is compressed in volume during solidification. It is along these cracks that the Chelyabinsk asteroid, which separated from the parent asteroid about 290 million years ago and was directed by a collision with another space object towards the Earth, when falling on its surface, disintegrated into many fragments. To carry out the shock experiment, a spherical sample of light lithology with a diameter of 4 cm was cut out of the material of the Chelyabinsk meteorite (fragments of light lithology correspond to the maximum of the original material of the parent asteroid).

The sample, placed under vacuum in a 6 mm thick steel container, was subjected to a converging shock wave created by an explosion outside the steel shell, with a gradual increase in pressure (from ~ 15 gigapascals in the outer layer of the sample to more than 400 gigapascals in its center) and temperature (over 1100 ° C in the center of the sample). After the experiment, the sample was cooled to room temperature (the rate of temperature drop in the center of the ball reached 80 ° C / sec), and then sawed into thin sections. After examining the sections using optical and electron microscopy, the scientists found four visually distinguishable structural zones showing different degrees of metamorphism, depending on the strength of the impact, pressure and temperature levels - light, dark, mixed lithology, as well as impact melt (in sequence from the surface spherical specimen to its center).

Slightly struck light lithology consists of silicates (such as olivine, pyroxene, and plagioclase, which are largely transformed into maskelenite), irregularly shaped metal grains, and inclusions of troilite and chromite minerals. Silicates contain a large number of impact cracks, which is typical for samples of light lithology of the Chelyabinsk meteorite. In addition, shock veins are occasionally observed in light lithology.

Dark lithology is the result of shock impact: its formation is due to the fact that molten metal and troilite, propagating from the zone with the highest pressure and temperature - the center of the "experimental" spherical sample, fill all cracks inside olivine and pyroxene grains, shock veins, voids and interfacial borders. For this reason, this zone is the least porous and completely opaque.

Mixed lithology is an area of ​​light debris within a dark matrix. A characteristic feature of this zone is traces of intensive crushing of silicates: incompletely molten olivine grains 'float' in the silicate melt, but the zone is free of troilite melt (this is due to the immiscibility of silicate and troilite melts.). Plagioclase is melted by impact. There are eutectic iron-troilite aggregates, opaque shock veins, and melt pockets. In the zone of the impact melt, the material appears to have reached complete melting or evaporation.

The gray shock melt in the center of the spherical sample contains recrystallized olivine in the form of needle-like crystals embedded in the quenched residual silicate melt. Olivine crystals are free of any shock effects and, therefore, are formed after shock loading from a melt or steam. The quenched melt contains numerous voids, as well as nano- and microparticles of iron-troilite melt.

An article describing the study of changes in optical properties in experimental material was published in the journal Astronomy & Astrophysics (Q1).

In general, microscopic analysis showed a great similarity between the experimental results and the shock effects found in the samples of the Chelyabinsk meteorite. This was also confirmed by comparisons with a computer model. However, there are also differences, primarily in the formation of mixed lithology.

“The presence of this zone with its optically brighter appearance and practically absent effects of shock darkening caused our surprise: as far as we know, among the fragments of the Chelyabinsk meteorite found, only one sample, described by graduate student Alevtina Maksimova, was found to have an equivalent for this zone,” explains Viktor Grokhovsky.

“We assumed that, due to the impact and melting of troilite, the material in the state of melt would penetrate through cracks and pores and retain its dark appearance, as was observed in fragments of the Chelyabinsk meteorite. In reality, however, we observed in this zone the beginning of a significant melting of silicates. The silicate melt does not mix with the troilite melt and thus creates an insulating layer that surrounds the remaining silicate grains and protects them from penetration of molten troilite and metal."

The studies described are of great practical importance in relation to space security problems: thanks to such experiments and with the help of optical measurements, science can more confidently recognize which celestial bodies of what composition and structure - made of stone, metal, ice, and so on - are approaching our planet.

“In April 2029, we will meet with the asteroid Apophis. Its is 350 meters long, the mass is 5 thousand times greater than the mass of the Chelyabinsk meteorite, the trajectory will pass only 38 thousand km from the Earth, this is only a tenth of the distance to the Moon, which is below the orbits of some satellites. The results of our experiment will contribute to the 'identification of the personality' of Apophis,” comments Grokhovsky (in early November, Viktor Iosifovich took part in a NASA conference dedicated to preparing for this asteroid).

The spectral studies of the sample after the experiment in Snezhinsk were carried out by representatives of UrFU in collaboration with the Institute of Geology and Geochemistry of the Ural Branch of the Russian Academy of Sciences, Helsinki University, German Aerospace Center and supported by the Ministry of Science and Higher Education of the Russian Federation, the Russian Foundation for Basic Research, the Academies of Sciences of Finland and the Czech Republic , NASA Center for Asteroid and Lunar Surface Research.

On Dr. Grokhovsky and Chelyabinsk Meteorite

The fall of the Chelyabinsk meteorite in the form of a bright fireball with a powerful destructive effect and an extensive meteor shower occurred on February 15, 2013 near Chelyabinsk. At the time of entry into the dense layers of the atmosphere and the subsequent destruction, the size of the asteroid was about 19.8 m in diameter, and its mass was 13 thousand tons.

The power of the explosion over the Chelyabinsk region was 440 kilotons, which is about 20 times more than the power of the atomic bomb dropped on Hiroshima. The meteorite has been classified as a normal multiphase porous chondrite type LL5. Previously, meteorites of this type have not been found in Russia. Viktor Grokhovsky is a graduate of the metallurgical faculty of the Ural Polytechnic Institute (now UrFU). For researching and establishing the nature of the Chelyabinsk meteorite, he was included by the most authoritative scientific journal Nature among ten scientists in the world, whose activities determined the development of science in 2013. An asteroid 16399 in the solar system and a mineral from the iron meteorite Uakit, found in Buryatia in 2016, are named after Viktor Grokhovsky.