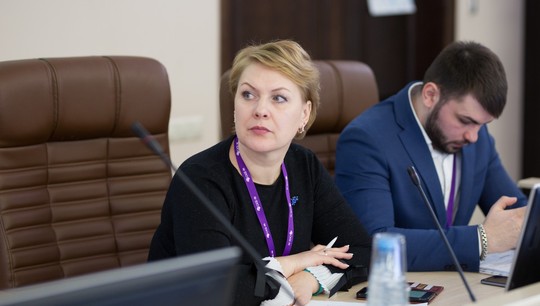 Chemists from the Ural Federal University and the Institute of Organic Synthesis of the Ural Branch of the Russian Academy of Sciences have synthesized new push-pull (contain donor and acceptor groups) fluorophores with unique structure and properties. These are asymmetrically substituted aryl-terpiridines that can be used as highly efficient fluorescent probes / chemosensors for various metal cations.

The scientists published an article on the content and results of the work in the Journal of Photochemistry and Photobiology A: Chemistry.

In the course of research, chemists have developed an original method for producing chemosensors - by direct assembly in one molecule of a receptor fragment that does not enter into a chemical reaction with a metal, but forms coordination bonds with it, and a fluorophore that "signals" this by emitted light. In other words, the uniqueness of the obtained chemosensors is that they not only determine the presence of zinc in a particular material, but also “report” this by active visualization.

“We have achieved an efficient transmission of the fluorescent response to metal cations. It turned out that the obtained terpyridines are very promising as highly sensitive and selective fluorescent probes for zinc cations, including those in biological media. According to our calculated values ​​of the complexation constants, the synthesized terpiridines are among the most effective for these cations, the quantum yields of photoluminescence are quite high,” describes Prof. Olga Shabunina, a member of the research team, associate professor of the Department of Organic Synthesis Technology at Ural Federal University.

The lack of redox properties in zinc (unlike, for example, copper and iron) explains the ability to transport it into biological systems without causing oxidative damage. Therefore, zinc is introduced into cosmetics, biologically active additives, drugs, etc. Accordingly, monitoring of zinc in biological fluids (for example, human urine) can serve to control physical condition, to study the metabolism of zinc-containing drugs.

“The use of terpyridines for the analysis of cosmetics, food products, for medical diagnostics of the human body remains largely unexplored. Therefore, it can be argued that the use of the obtained samples of terpyridines as chemosensors for the listed purposes is our know-how. Its fruitfulness has been confirmed by a number of experiments we have conducted. In addition, the terpyridines obtained by us can be productively used for the determination of zinc cations in industrial effluents, that is, in environmental monitoring, ”says Olga Shabunina.

Chemosensors have already shown their applicability for detecting cations and other metals. The extraordinary properties of terpyridines made in Ural have been tested on some samples of cosmetics (including face cream mask), on food (oats, flaxseed, almonds, mussels, cocoa), on an OTC food supplement and urine from a patients with symptoms of a cold diseases who took zinc containing meds.

Moreover, their synthesis was carried out using common materials and simple synthetic procedures.

“We did not resort to expensive catalysts, inaccessible reagents, or multi-stage syntheses. Thanks to this, the cost of synthesis of our chemosensors is noticeably lower than their counterparts, ”emphasizes Olga Shabunina.

In addition, the research was supported by grants from the Russian Science Foundation (No. 19-73-10144) and the Grants Council under the President of the Russian Federation (No. NSh-2700.2020.3). A special contribution to the implementation of scientific work belongs to the professor of the Department of Organic and Biomolecular Chemistry of the Ural Federal University, the leading researcher of the IOS UB RAS Grigory Zyryanov and the senior researcher of the IOS UB RAS, Doctor of Chemical Sciences Dmitry Kopchuk.