Scientists have investigated the nature of dynamic chaos in complex systems 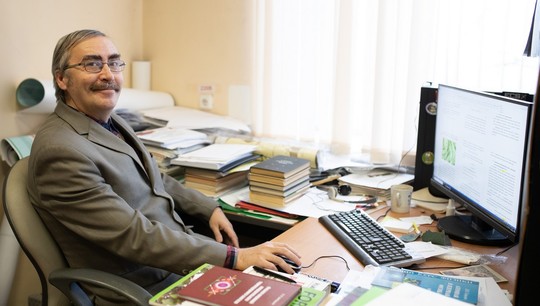 Aleksey Melkikh, professor of the Department of Technical Physics of the Ural Federal University, leads the research on chaotic movement. Photo: Ilya Safarov.

Investigating the nature of dynamic chaos in complex systems (in other words, their unpredictable behavior) - this is the task set by the physicists of the Ural Federal University. To do this, in the computer model (its development was the merit of Ruslan Beregov, engineer of the Department of Technical Physics of the UrFU), they put two-dimensional and three-dimensional coordinates of the members of the flock, each of which strives to get to its center with a constant modulus.

Scientists described the results of modeling in an article in the journal Chaos, Solitons & Fractals.

“The flock members see each other, but with a delay. This is inherent in all living organisms, as well as systems that process information. It seems to us that we recognize each other instantly, but in reality, the brain takes several milliseconds to process the light signal. Deep sea fish often identify each other by reacting to pressure waves, this also happens with a certain delay. Bacteria “recognize” each other by emitting chemical signals, thus, it takes several seconds, or even minutes, to “recognize” each other”, - gives examples of the head of research, professor of the Department of Technical Physics of the UrFU Alexei Melkikh.

In addition to the delay factor, they introduced the error factor in determining the exact coordinates of both the members of the flock and its center into the computer model (errors are also characteristic of organisms and devices). In the presence of an error, the flock begins to demonstrate effects that correspond to “singularly perturbed” systems.

“Both delays and errors must be taken into account when calculating the movement of the flock. As a result of our experiments, it turned out that delays play a very important role. Due to their influence, the center of the flock, around which it revolves, does not stand still, but constantly experiences self-oscillations. At the same time, the period of auto-oscillations depends very little on the speed of movement of individuals and on the magnitude (variance) of the error. Quite naturally, a higher speed corresponds to a larger amplitude of auto-oscillations, but the presence of complex transient processes is an interesting phenomenon and requires further study,” the scientist explains.

In general, the conclusions drawn by Alexei Melkikh and Ruslan Beregov based on the results of the experiment turned out to be quite unexpected. So, it turned out that as the flock moves, something like a phase transition occurs (the most famous examples of such transitions are from a gaseous state to a liquid, from a liquid to a solid) - switching from one chaotic regime to another. In addition, the scientists found that significant changes in the system, its unexpected properties and behavior, described above and manifested with some errors (in other words, noise), do not increase with even greater noise, but, on the contrary, disappear, which does not fit into familiar notions and awaits an explanation.

“The study of the behavior of large collectives is an emerging field of science, yet still full of the inexplicable. We took a step towards solving it. Our work brings humanity closer to understanding the patterns of movement of such collectives and to efficiently managing them using, for example, radio, sound or light signals. These are colonies of bacteria, and myriads of insects, schools of fish, and flocks of birds, and herds of domestic animals, as well as squadrons of unmanned aerial vehicles performing search, reconnaissance, surveying the area and so on," explains Professor Melkikh.