PhD Researcher Hesham Zakaly (Egypt) told us about this method 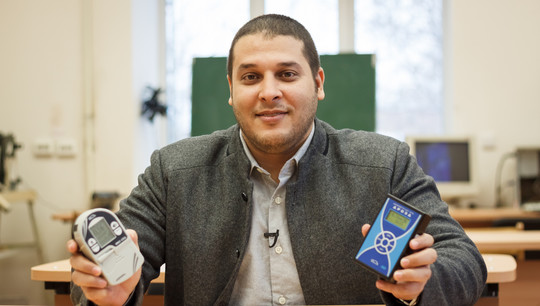 Scientists from UrFU, MEPhI (Moscow), Al-Azhar Universities (Cairo, Egypt), Tabuk (Tabuk, Saudi Arabia), Sharjah (Sharjah, United Arab Emirates), Uskudar (Istanbul, Turkey) and Assiut University (Assiut, Egypt) have figured out how to dispose of hazardous bypass cement dust by reprocessing it. They suggest inserting this calcified dust, remaining in the vicinity of cement factories, in the glass compounds protecting against radiation. The technology was tested - on the first prototypes it was found out that glasses with the addition of bypass dust are stronger, transparent and durable compared to analogues.

Glass composition, technology and experimental results are published in the Journal of Hazardous Materials.

BCD, or bypass cement dust is an important contributor of many respiratory human health issues. In this work scientists investigate BCD glass compound's optical, physical and gamma-ray shielding properties. The experimental results of mass attenuation coefficients are contrasted with the FLUKA Monte Carlo code and the XCOM database at 0.081, 0.356, 0.662, 1.173, and 1.332 MeV photon energies. Additionally, the mechanical, structural, and optical properties of these glasses were measured. A rising peak with an increase of BCD concentration in the region from 450 cm-1 to 480 cm-1 was observed. The results show that shielding properties such as the mass attenuation coefficient (μm), the effective atomic number (Zeff), and the effective electron density (Nel) increase as BCD fraction increases. The half value layer (HVL), the tenth value layer (TVL), and the mean free path (MFP) decrease as the BCD content increases. It is noticed that 20Na2O-20BaCl2-(60-x)B2O3-xBCD, where (x = 0, 10, and 20 %), has the highest optical conductivity value at x = 20%. It was found that the gradual addition of BCD content increases the hardness of the studied glasses.

“The global growth of urbanization has led to an increasing demand for cement. Today, factories around the world produce about 4 billion tons of cement per year. Considering that about 5% of the slag is dust waste, about 192 million tons of dust are generated worldwide every year. These are partially calcined dust and fully calcined dust - bypass. The second is very fine, strongly alkaline, interacts with moisture, pollutes the air and is one of the causes of diseases, - says the co-author of the work, researcher of the Department of Experimental Physics of the UrFU Hesham Zakaly.

Since the dust contains calcium, it was decided to add it to the composition of protective glasses (the research group is also working on creating a new generation of radiation shields). Such glasses are used for medical purposes (for example, in X-ray rooms) or in storage facilities for low and intermediate level nuclear waste.

The most common radiation protection products are made from lead or lead-based materials. However, according to scientists, radiation glasses with the addition of bypass dust are more durable, non-toxic and cheaper. In addition, in comparison with analogs, these samples are better protected from radiation and are more transparent.

“We studied a three-glass system made from chemicals of a specific composition. Investigated the optical, physical, shielding properties, protecting against gamma radiation. Additionally, we measured mechanical and structural characteristics, - says Hesham Zakaly. “As a result, it was found that shielding properties such as mass attenuation coefficient, effective atomic number and effective electron density improved as the proportion of bypass cement dust in the glass composition increased. It was also found that the gradual addition of this dust increased the hardness. And the addition of heavy metal oxides to the glass lattice improved its protective properties."