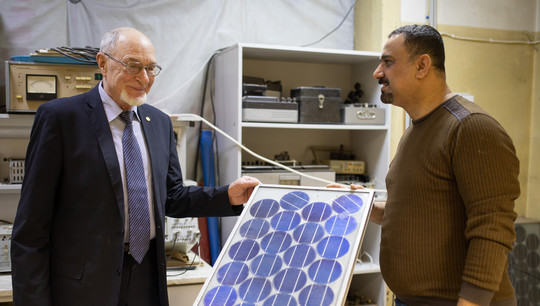 Scientists from the Ural Federal and Northern Technical Universities (Kirkuk, Iraq) have created a high-performance plate solar water distiller. The developers have determined its characteristics depending on the weather conditions. Articles describing the apparatus and the results of the experiments were published in the journals Materials Today: Proceeding and Case Studies in Thermal Engineering.

The main objective of this study is to improve traditional solar still (TSS) productivity in two successive stages. In the first stage, a rotating hollow cylinder is used within the solar still to increase the surface area of evaporation and reduce the boundary layer thickness of untreated water film. Three rotational speeds have been tested (0.5, 1 and 3 rpm). The second stage included the integration of an external solar collector with the modified solar still (MSS) to raise the basin saltwater temperature. From the analysis of experimental results, it is observed that the productivity increased with decreasing rotational speed of a hollow cylinder and the maximum value obtained at the lower speed (0.5 rpm). Furthermore, integrating outer solar collector results in further enhancement, where the productivity of freshwater observed to be 5.5 L/m2 for MSS compared to 1.4 L/m2 from TSS. Accordingly, the productivity enhanced by 292% at an estimated cost to produce 1 L of freshwater of 0.048 $ and 0.049 $ from MSS and TSS respectively.

“The advantage of such a device is that it works not only under direct rays, but also with scattered radiation, which means it is productive even in cloudy weather. In addition, this type of solar watermaker is characterized by ease of manufacture, easy installation and maintenance, good building compatibility, and reliable operation. At the same time, the productivity and, consequently, the economic efficiency of devices of this traditional type remains relatively low”, - comments Sergey Shcheklein, scientific leader of the project, head of the Department of Nuclear Power Plants and Renewable Energy Sources of UrFU.

In this regard, a modified solar distiller was created at UrFU. In the new device, under the action of a pump, water from the reservoir first passes through the solar collector - a plate with 30 copper tubes on it, which accumulates solar energy and is heated under the rays of the Sun. The water heated in the solar collector flows back to the reservoir, inside which a hollow rotating cylinder is mounted. The movement of the cylinder is provided by a small, photocell-powered DC motor, which is used in a car window regulator.

“Our research has shown that the thinner the water layer is, the faster it heats up and evaporates. According to this finding, the rotating cylinder inside the tank captures water in the form of a very thin film. In this form, the water evaporates in a matter of seconds. Thus, we have radically increased both the area and the evaporation rate," explains Naseer T. Alwan, a researcher at the Northern Technical University and the Department of Nuclear Power Plants and Renewable Energy Sources of the Ural Federal University, a developer and creator of an innovative design of a solar desalination plant, who carried out basic experimental research and mathematical modeling of processes.

The solar collector, as well as the transparent lid above the tank, are positioned at an angle of 35 degrees to the horizon - so that the sun's rays are perpendicular to the surface of the solar collector and to facilitate the distilled water to slide over the solar still lid. The water tank, rotating cylinder and solar collector plate are made of galvanized iron and black painted steel to maximize absorption of solar radiation.

Testing of the equipment created at UrFU was carried out in Yekaterinburg for four months - in summer and autumn, on clear days. The analysis showed that the highest productivity of the solar distiller was recorded in July, at noon, during the period of the highest solar radiation intensity. On this day, the daily output of the plant was 12.5 liters of condensate per square meter. This is three times more than the world's best analogs, and four times more than when using traditional designs.

“The daily heating of the water in the tank to temperatures above +60 ℃ was provided by intense solar radiation: in summer it is often more than 1,000 watts per square meter. And to heat the water in the tank and evaporate it in the evening and at night, after sunset, we began to use a paraffin heat accumulator. At the same time, natural cooling of the glass lid above the tank in the evening and at night led to a decrease in the ambient temperature: in July during the day it reached a maximum of +34 ℃, and in the evening it dropped to +20 ℃, ”continues Naseer T. Alwan.

The developers are planning further improvements. For example, the use of an absorption refrigerator, which improves the evaporation of water and increases the rate of condensation by means of ultrasound spraying the water in the form of microscopic droplets.

“The volume of accumulated solar energy will increase by an order of magnitude, energy costs will decrease significantly, the installation will become more efficient, more compact and cheaper. The rate of evaporation and condensation and the increase in productivity will increase by another 1.5–2 times, since the system will work day and night, ”sums up Sergey Shcheklein.

Given the uniqueness of the results, the inventors applied for a patent.

Lack of clean water is one of the world's biggest problems, especially for countries such as Iran, Iraq, Syria, Egypt. According to the World Health Organization, nearly 800 million people lack access to clean water. For this reason, about 3 million people die every year. The way out is in desalination and purification of sea and polluted water or in condensation of water from humid air. For these purposes, the use of solar energy is promising - in contrast to fossil fuels, it is renewable, environmentally friendly, universally available, including from a technological and economic point of view.