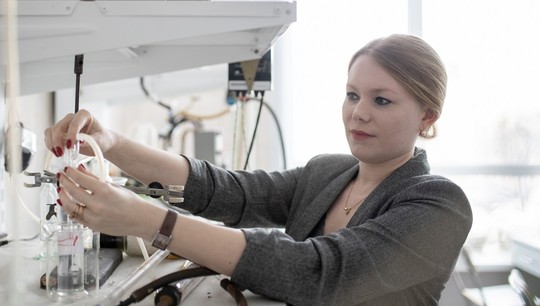 Chemists from the Ural Federal University and the Institute of High-Temperature Electrochemistry of the Ural Branch of the Russian Academy of Sciences (IHTE UB RAS) have created a material with high proton conductivity based on barium-lanthanum indate. The experiments carried out made a significant contribution to the understanding of the mechanisms of proton transport and brought closer the prospect of creating a highly efficient proton solid oxide fuel cell (SOFC).

The article about the work of scientists was published in the International Journal of Hydrogen Energy.

A scientific group of specialists from UrFU and IHTE was the first in the world to begin researching the possibility of realizing proton transport - the ability to carry out the directed motion of positively charged hydrogen ions - in materials with the Ruddlesden-Popper block-layer structure. Using barium-lanthanum indate as a base compound, the scientists came to the conclusion that such materials can be used in hydrogen energy as an electrolyte for SOFCs.

To improve the functional properties of this compound, chemists sequentially doped (replaced) in its crystal lattice some of the lanthanum or indium atoms with atoms of other chemical elements. Atoms of titanium, zirconium, niobium, calcium, strontium and barium were used as dopants.

Researchers have shown that two factors affect the efficiency of proton transfer. The first is geometric: the size of the space within the crystal lattice available for the transfer of protons. It was found that the introduction of a dopant leads to a significant increase in both the parameters of the crystal lattice and the "free" space inside it.

The scientific work described in the article is fully consistent with the plan for the development of hydrogen energy, which was approved by the Government of the Russian Federation in October last year and is calculated until 2024. In this regard, a team of scientists from UrFU and IHTE, which includes Natalia Tarasova, applied to the Russian Science Foundation for grant support within the framework of the President's program of research projects implemented by leading scientists, including young scientists.

The ultimate goal of the researchers is not only to study the fundamental aspects of proton transfer in block-layer structures, but also to develop a prototype of an environmentally friendly, high-performance and economically affordable proton fuel cell. To achieve this goal, the Ural Federal University and the Institute of High-Temperature Electrochemistry of the Ural Branch of the Russian Academy of Sciences are starting to prepare a development program for the Competence Center for Materials for Hydrogen Energy.