Vladimir Shur shared about the discovery in a new interview 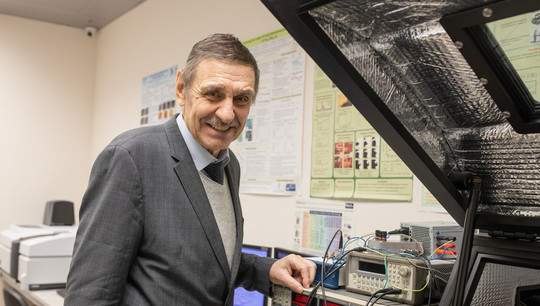 Vladimir Shur, Director of the Ural Center for Shared Use "Modern Nanotechnologies", Ural Federal University, spoke about the research of ferroelectric domains, the creation of nanostructured materials, the study of nanotoxicology and the development of bioprinting. The scientist gave an interview to the Nanoindustry magazine.

“I graduated from the Ural State University and have been working there for over 50 years. It so happened that over the years the name of the university, city and country has changed. I studied and started working in Sverdlovsk, and now I am an employee of the Ural Federal University in Yekaterinburg. I created the Ferroelectric Laboratory with several employees and students, and the desire to conduct experimental research at the world level and expanding the range of scientific interests led to the acquisition of modern analytical and technological equipment and the creation of a large team of researchers,” says Vladimir Shur.

The Ferroelectric Laboratory was founded 40 years ago. The research of the employees is mainly related to the study of the domain structure of various ferroelectrics. Scientists work on these topics together with Russian and foreign scientists (China, India, Portugal, Belarus).

“I started researching ferroelectrics after completing my Ph.D. thesis on semiconductor lasers. In the early 1980s, physicists actively investigated cylindrical magnetic domains (CMDs) and created memory elements in which information moved in a stationary medium. I dreamed of creating a similar memory on ferroelectric domains. It turned out that even then, without knowing it, I first took up nanotechnology. The point is that domains in ferroelectrics are separated by nanometer-thick domain walls. A few months later, we (it seems, were the first in the world) learned how to write submicron domains, but we became convinced that, unlike CMD, they cannot be moved, ”explains Shur.

Despite the fact that the scientist failed to create a memory similar to magnetic, he was fascinated by the study of domains and the mysterious evolution of the domain structure. At a time when all members of the ferroelectric community (and not only them) were studying high-temperature superconductivity (HTSC), the scientific group of Vladimir Shur continued to study ferroelectric domains.

Ural Center for Shared Use "Modern Nanotechnologies" was established in December 2007, when Russia officially began to engage in nanotechnology.

“The establishment of the center has radically improved the experimental capabilities of our team. Before that, most of the experiments had to be carried out abroad, in the world's leading research centers and universities, including Stanford and Pennsylvania University (USA), as well as in universities in France, Great Britain, Germany and Japan, explains Vladimir Shur. - The formation of the Copmuter Center made it possible to carry out complex unique research in the field of the study of ferroelectrics and greatly expanded the range of my scientific interests. Naturally, the newly developed areas of research are related to nanotechnology, among them: nanotoxicology, bioprinting, nanoparticles, nanostructured surfaces, nanodomain engineering and nanobiomimetics ”.

Today, the center's activities combine education, science and innovation. The main task of physicists, chemists and biologists working in the center is to conduct a wide range of research for teachers and scientists of Ural Federal University, universities of the country, institutes of the Russian Academy of Sciences, as well as enterprises with high-tech production.