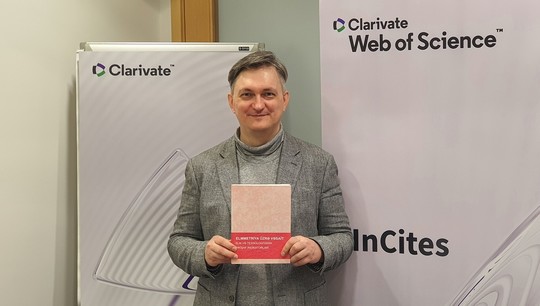 Employees of the Ural Federal University and Clarivate Plc presented the second, updated and expanded edition of the popular textbook in Russian "The Guide to Scientometrics: Indicators of Science and Technology Development". The book was prepared under the editorship of Mark Akoev, head of the scientific laboratory of scientometrics of the Ural Federal University, and is intended for researchers, research leaders, university librarians and anyone interested in measuring and evaluating the development of science and technology.

“Since the first edition of the Guidelines in 2014, the use of scientometric indicators has become an integral part of Russian research management practice. The leaders of organizations began to pay more attention to the quality of publications and the development of scientific research, and not to chase a wave of publications at any cost, ”says Mark Akoev. “The book is very popular among researchers, heads and administrators of universities, scientific organizations and projects, employees of libraries and information centers, both in Russia and in the countries of the former Soviet Union.”

The first edition included a foreword by Dr. Eugene Garfield, founder of the Scientific Information Institute (ISI) ™, which is preserved in the second edition. The second edition highlights new data sources, tools and approaches to the analysis of scientific activity. A special section has been added to the manual to familiarize researchers with the method of scientometric analysis by means of "profiling" citations. This method allows you to move from a one-dimensional assessment of scientific activity for any one indicator to a multivariate analysis.

The second edition also includes an introduction prepared by experts from the Institute of Scientific Information and Russian translation of two research reports: Profiles instead of indicators and Mega-Authorship and Scientific Analytics. Both reports are dedicated to the responsible application of modern methods of scientometric analysis.

“The new edition has been revised and supplemented taking into account the numerous wishes of readers, the availability of scientometric tools, the increased level of qualifications of Russian-speaking specialists in the field of scientometrics. A common thread running through the entire publication is the idea that quantitative methods of measuring scientific results are only a supplement to the qualitative - expert assessment of the impact and effectiveness of scientific teams, ”says Mark Akoev.

Order an electronic copy of the second edition of the "Guide to Scientometrics: Indicators of Science and Technology Development" at: clarivate.com/ru/book.