International Processes, a MGIMO-issued journal, is one of the most authoritative in Russia 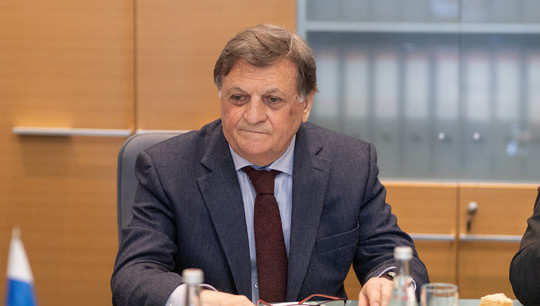 Valery Mikhailenko, one of the leading Russian historians of international relations, professor of the Department of Theory and History of International Relations of the Ural Federal University, gave an interview to the International Processes magazine (MGIMO). The expert told why the project of a "democratic world" is a utopia, how the system of global governance is being adjusted today, and in which constitution there are traces of the continuity of fascist corporatism.

According to Mikhailenko, the routine work on adjusting the system of global governance has been going on since 1945, and remarks about the crisis of the modern world order arise in countries that are losing global influence.

“After the collapse of the CMEA, the Warsaw Pact and the Soviet Union, the world balance of power changed in favor of the United States of America. The US leadership and liberal constructivists tried to substantiate and implement America's hegemony under the guise of a unipolar “liberal order,” explains Valery Mikhailenko. - From the point of view of the origin of the concept, it had approximately the same logic as the "world communist order", "fascist order", "Nazi order". It was about the play of the human mind, which forms a political construct based on social or political demand. If we present the approaches in a simplified form, then the utopian project of a “democratic world” was being implemented, in which states of the same type do not fight among themselves. "

Mearsheimer agrees, the expert continues, in the 1990s the United States made an attempt to draw both China and Russia into this unipolar "liberal order", like a funnel. However, the attempt to establish liberal democracy in China and Russia failed. They helped China to enter the system of the international division of labor, the WTO, opened up American markets and access to modern technologies, hoping that it would transform. “In a sense, this was a continuation of the convergence theory applied to China. But after it became clear that China was not going to play according to the American plans of a "unipolar world", but turned into a real opponent of the United States with its own views on world hegemony, the new power elite, represented by President of the United States Donald Trump, began a policy of containing China, says Valery Mikhailenko. The United States has taken a similar position in relation to Russia, considering the reunification of Crimea with our country as a violation of international law and a manifestation of expansionism.

“What position do I take with regard to the discussion of the crisis of the 'liberal order'? There is a crisis of global governance, which is associated with a change in the balance of power between the leading players: the strengthening of China and the curtailment of the transformational agenda in the United States. The world ceases to be unipolar, and hardly anyone will argue with this. But there is no crisis of liberal values, since there is no functioning liberalism, ”says Professor Valery Mikhailenko.

There is no pure democracy in China, but either in the United States, Valery Mikhailenko claims. In India, for example, democracy gets along with the caste system.

“All countries have their own specifics. There are a huge number of such examples, and it is difficult to determine where the system is more democratic. About Britain, we can say that they sit in parliament not like that, they vote differently. But the standard of civilization, despite the variety of political regimes and systems, has no alternative, ” the expert concludes.