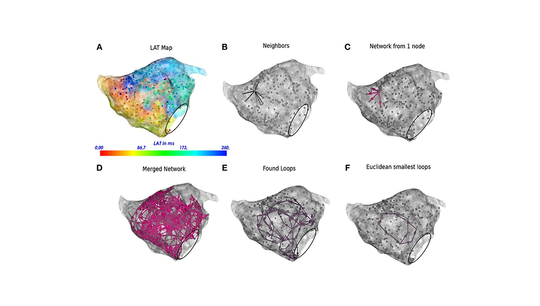 Researchers from Belgium, the Netherlands, Russia, and Italy have developed a breakthrough method for quickly, accurately, and reliably diagnosing cardiac arrhythmias. They called it Directed graph mapping (DGM). The technology principles are published in JACC: Clinical Electrophysiology.

One of the members of the research team is Alexander Panfilov, leading specialist of the laboratory of computational biology and medicine at Ural Federal University (Russia), head of the biophysics group at the University of Ghent (Belgium), professor at the Department of Cardiology at Leiden University (Netherlands). All DGM software was developed by Enid Van Nieuwenhuyse and the research was led by prof. Nele Vandersickel, a former postdoctoral researcher in Panfilov's group.

“The pioneering step in our approach is application of novel methodology to analyze local arrival time information on the electrodes,” said Alexander Panfilov. “We connect these points into a three-dimensional network and thus track the sequential path of the wave. In mathematics, such directed networks are called graphs, they are widely used, for example, in the creation of diverse algorithms for search engines and social networks, in the diagnosis of Alzheimer's disease, multiple sclerosis, and epilepsy. We are the first group which applied the theory of graphs to the problems of describing the electrical activity of the heart, localizing the sources of cardiac arrhythmias, identifying their mechanisms, and determining potential targets for ablation.”

First, using DGM, researchers processed the results of experiments by another group of scientists. Thus, it was possible to correct the initial conclusions and precisely establish the nature of arrhythmias.

Furthermore, DGM method underwent clinical evaluation in one of the best clinics in Belgium. The study involved 51 patients with complex atrial tachycardia. At the same time, cardiologists used the latest CARTO system of the leading medical and technological company Biosense Webster (USA). This system uses electrodes visualizes a dynamic map of wave disturbance and allows to determine a specific area of the heart where arrhythmias are formed. Test results: the method coped with the task in 38 cases, professional cardiologists - in 33 cases. In other words, DGM is highly effective in almost 75% of cases.

“Our method makes it possible to diagnose arrhythmias origin areas with high accuracy and reliability in a fully automatic mode,” said Alexander Panfilov. “In just a minute, it can localize the arrhythmia, that helps to eliminate arrhythmias in the shortest possible time. Considering that in manual data interpretation can take up to a quarter of an hour, the process is 15 times faster.”

The authors of the technique are engaged in its further improvement - to better understand the nature of the formation of arrhythmias and to treat even more complex heart diseases, such as atrial fibrillation and ventricular tachycardia.

Cardiac arrhythmias are usually caused by rotating electrical waves that disrupt the normal rhythm of the heart and can cause serious complications and even sudden death.

To cure arrhythmia, it is necessary to remove the pathogenic area in the heart and thus make it impossible for the electric wave to rotate. For this, electrodes are placed in the heart, with the help of which they establish where the wave rotates, and the removal of which area will lead to the treatment of arrhythmia. Cardiologists pass a high voltage electric current through the electrodes. The current then burns the heart tissue and dampens the wave curing the problem zone. This method is the most effective in treating arrhythmias and is called ablation.

In some cases, ablation is performed on several adjacent areas of the heart to create a whole barrier in the path of the propagating vortex. Determining the sections of wave rotation from the electrode records is a difficult task. In most cases, the cardiologist must decide on the "manual" operation. The methods of automatic identification of such sources available so far have shown their ineffectiveness, especially in cases of complex arrhythmias. As a result, the interpretation of the situation depended on the qualifications of the doctors; it took additional time to determine the treatment tactics, and the ablation procedure was laborious. These factors reduced the likelihood of a positive result of operations and increased the risk of complications.