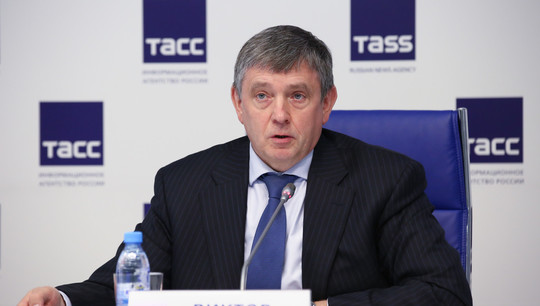 Chairman of the UIREC managing board, UrFU Rector Victor Koksharov took part at a round table with the representatives of universities, academic institutes and enterprises of the Sverdlovsk, Chelyabinsk and Kurgan regions. Rector emphasized that the participants of the Ural Interregional Research and Education Center - Advanced Industrial Technologies and Materials have all necessary potential for achieving the best results among all similar REC centers in Russia.

“I am confident that our scientific and educational center will be the most successful in the Russian Federation. The center has already shown a very high efficiency, despite the fact that the victory in the federal competition was just a few months ago, - said Victor Koksharov. - All its participants have shown a desire to work together. This ensures the cohesion of a single macroeconomic region in the matter of introducing modern technologies in industry. In the near future, a meeting of the REC council will be held, at which key projects will be defended with the participation of Deputy Prime Minister Dmitry Chernyshenko. I want to thank all our colleagues from the Sverdlovsk, Chelyabinsk and Kurgan regions for their close integration work. "

Rector Koksharov noted that the Ural REC is developing cooperation not only with large industrial enterprises, but also with medium and small ones. A great example is the company Aksalit, which, together with the Institute of New Materials and Technologies of the Ural Federal University, develops technologies for optical separation of waste. This is an extremely important problem that can be solved very soon on the basis of the latest solutions - first in Yekaterinburg, and then scaled up in other regions of the Russian Federation.

“Ecology is an extremely important area, our scientists, together with enterprises, are dealing with the problems of sorting and processing solid household waste, industrial waste, extracting valuable metals from waste,” added the Rector of UrFU. - A number of projects of the Ural REC are associated with the creation of environmentally friendly modes of transport - from trams to high-speed trains. In addition, the technologies associated with the use of hydrogen fuel in the creation of solid oxide fuel cells are also very promising. In the near future, all this can be implemented and will allow our center to demonstrate advanced technologies that are at the highest world level."

The strategic goal of the Ural Interregional REC is Russia's leadership in creating advanced production technologies and new materials in the following areas:

At the moment, the UIREC's portfolio contains 48 joint projects of participating organizations at the intersection of thematic priorities and basic competencies.

“Combining efforts of science, education and business is designed to provide a scientific and technological breakthrough. And we see a high interest in the activities of the REC of the real sector of the economy. So, last year the financing of the events amounted to almost 5 billion rubles, 70% of which were extra-budgetary funds,” said Vladimir Yakushev, Plenipotentiary Representative of the President of the Russian Federation in the Urals Federal District, Chairman of the Supervisory Board of the REC.