Scientists Have New Data on the Nearest Planet to the Sun

This is about the flux of meteoric microparticles, the densest and fastest in the solar system 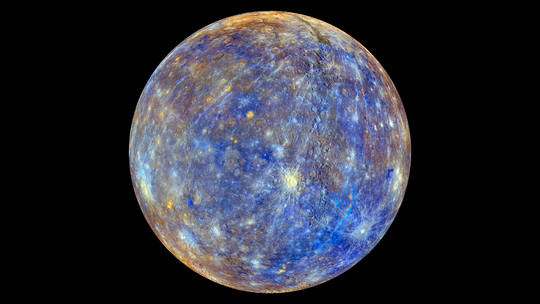 Mercury is the smallest planet in the solar system, only slightly larger than the Moon, while their surfaces are similar. Photo: NASA.

An international team of planetary scientists from Russia, Finland, and the United States has analyzed for the first time the factors that determine the number of boulders on the surface of the nearest planet to the Sun, Mercury. Boulders are fragments of rock that form as a result of meteorite impacts on the planet's surface and are located in areas of fresh impact craters hundreds of meters in diameter and wider. Their exact age is difficult to estimate, but the fact that they are deeper compared to heavily degraded craters of similar size indicates that they are relatively young. Description of the research and conclusions from them, the scientists published in the journal Icarus, one of the world's leading scientific publications dedicated to the study of the solar and other planetary systems.

First, the researchers studied all the images of Mercury's surface obtained in 2015 during the last phase of missions over it by the Messenger automatic interplanetary station. In 3,000 images, scientists noted only 14 boulders up to 5 meters in size (smaller objects were indistinguishable). Then scientists monitored images of the lunar surface: Mercury is the smallest planet in the solar system, only slightly larger than the Moon, and their surfaces are similar. The resolution of images of the Moon (taken by the Lunar Reconnaissance Orbiter, launched to the Moon in 2009) is much better. Therefore, in order to make a correct comparison with Mercury "portraits" of the Earth's satellite had to be specially "deteriorated" to the quality of Mercury photos.

"A comparison of the materials led us to the conclusion that boulders occur about 30 times less frequently on Mercury than on the Moon. Of course, this quantitative ratio is not exact. Nevertheless, we can confidently conclude that boulders on Mercury are a much rarer phenomenon than on the Moon," emphasizes Mikhail Kreslavsky, a researcher at the University of California.

The authors of the paper attributed the difference they found to three factors. The first is the micrometeoroid flow to Mercury. Because of the planet's proximity to the Sun, it is more than 50 times more abundant and 1.5-5.5 times faster than the flow to the Moon. Microscopic particles of interplanetary dust, hitting the Mercurian boulders, grind them like an abrasive material almost 15 times faster than on the Moon.

The second factor is a thicker layer of regolith (loose soil) on Mercury's surface, a "product" of the same intense micrometeorite flux. Due to the particular thickness of the regolith, space objects of tens of meters in size, when hitting Mercury, are less likely to "traumatize" the planet and knock out of its soil much fewer boulders. The erasure of boulders by microparticles, combined with the effect of thick regolith, may be the main condition explaining the small number of boulders on Mercury, planetary scientists suggest.

Finally, the third factor is the cyclical temperature changes that occur on Mercury during a solar day (which is equal to 176 Earth days). As the closest planet to the Sun, Mercury has the largest temperature variations of any planet in the solar system: from -180°C to +430°.

"High thermal stress, which is 2.5 times stronger than on the Moon, causes rapid material fatigue, numerous large and micro cracks and - eventually - the destruction of boulders. On the Moon, however, their "life span" reaches 100 million years," explains Maria Gritsevich, senior researcher at Ural Federal University and the Finnish Institute for Geospatial Research, associate professor of planetary studies at the University of Helsinki.

Thus, scientists attribute the relatively small number of boulders on Mercury to both rarer occurrences of formation and a more rapid process of destruction.

"Our analysis is limited by the poor quality of most available images of Mercury's surface and the very limited number of high-resolution images. Research could continue following the next mission to Mercury. The European Space Agency's new automated station with Japanese participation, BepiColombo, launched in October 2018 and is scheduled to reach Mercury in December 2025," notes Maria Gritsevich.