A breakthrough study by UrFU chemists 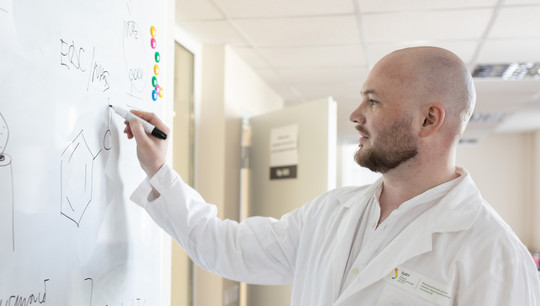 Scientists at Ural Federal University solved the problem of synthesizing enzyme-free catalysts for more accurate and less expensive determination of blood glucose concentration. The proposed solution lies in the joint layer-by-layer electrochemical deposition of palladium and silver on the surface of the electrode (test strip). The co-authors published an article about the work in the Russian Chemical Bulletin. This is the first description in the scientific literature of the method of layer-by-layer deposition of palladium and silver.

"We used a printed electrode for deposition - a miniature substrate with a suspension of multi-walled, that is, carbon nanotubes embedded in each other. Water from the suspension applied to the electrode evaporates, and the nanotubes remain on the electrode, thus increasing its specific surface area. Then we deposited first silver and then palladium on the modified electrode surface several times alternately," says Andrei Okhokhonin, associate professor of analytical chemistry at Ural Federal University and head of the research group.

The authors suggested an innovative method of layer-by-layer deposition of silver and palladium. The electrode is dipped alternately in solutions of silver salt AgNO3 and palladium salt K2PdCl4 in dilute sulfuric acid. In this form, the silver and palladium lack one and two electrons, respectively, before they become insoluble metal state. By placing the electrode in the solution, an electric current is applied to it. The current reduces the metals, and this leads to the formation of solid particles on the surface of the electrode. The operation is repeated four times.

"Such a technique has not yet been used, it proved to be effective. The new material has significant catalytic activity in the electrochemical oxidation of glucose. Moreover, unlike analogues, the oxidation reaction efficiently proceeds in neutral phosphate buffer solution medium, which corresponds to the acidity of human blood. Other similar systems are either markedly less sensitive to glucose or work in an alkaline environment and involve an additional step of blood sample dilution, in certain cases by a thousand times. All this complicates procedures and reduces the reliability of analysis results," emphasizes Andrei Okhokhonin.

According to the developers, the unique characteristics of the obtained system open up broad prospects for its practical application in creating an enzyme-free electrocatalytic sensor for determining glucose in whole blood. The research was supported by the Russian Science Foundation (Project № 20-13-00142).

Continuous monitoring of blood glucose levels plays a key role in modern therapy of diabetes, one of the most widespread diseases of mankind. Blood glucose concentration analysis using glucose meters uses complex protein compounds - glucose oxidase or glucose dehydrogenase enzymes, which are produced by microorganisms. The enzymes are attached to the sensitive part of the test strip (sensor), where a drop of blood is fed. As biological catalysts, the enzymes enable the glucose oxidation reaction, and the glucometer records the reaction and converts the result into a numerical value. A blood glucose level of 5.5-6.5 mmol/l is normal for adults.

Enzyme-based test systems are widespread, but have a number of drawbacks. Because enzymes are protein-based and degrade under heat or light exposure, their lifespan is limited. Therefore, enzyme production by microorganisms is a constantly reproducible and expensive process. This affects the cost and availability of sensors. The solution to the problem of making them cheaper is to use more stable and cheaper oxidation catalysts of synthetic rather than enzymatic origin instead of enzymes.

As such, science considers, in particular, palladium nanoparticles, a metal from the noble group.

The advantages of palladium nanoparticles include the necessary stability and increased sensitivity to glucose. At the same time, they exhibit significant catalytic activity only when pretreated in a saturated alkaline solution, which is then fed a blood sample. This complicates and slows down the analysis procedure. To date, only one method of direct blood analysis using enzyme-free catalysts based on palladium nanoparticles and in a neutral environment, the composition of which is close to the physiological properties of blood, has been developed. However, the low concentration of nanoparticles on the electrode surface does not provide the required sensitivity of the system and hence the accuracy of the analysis results.

It is known that the catalytic activity of palladium is enhanced in combination with silver: the two elements coated on the electrode part of the test strip improve the catalytic properties of each other, which increases the sensitivity of blood glucose analysis. But the existing technologies of creating such compounds do not allow complete control over the processes.

Thus, an urgent task is to synthesize enzyme-free catalysts for more accurate and cheaper determination of blood glucose concentration.