The First "Sandwich" Panels in the USSR Were Designed in UPI 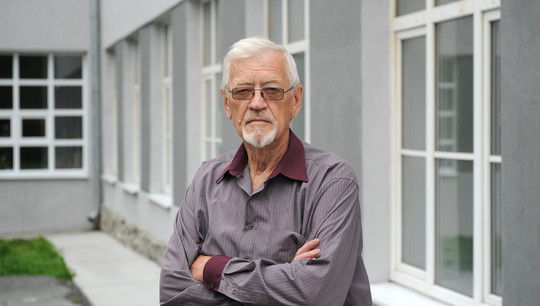 One of the co-authors of the invention, Vladimir Krokhalev, developed a furnace for obtaining the "stuffing" of sandwich panels made of foam plastic. Photo: Vladimir Petrov.

We continue the series of publications devoted to the 100th anniversary of the university. This time we will tell about the Ural Scientific School of metalworkers-builders, whose students invented sandwich panels.

Today sandwich panels - widespread wall, roofing and fencing building material, consisting of two thin-walled metal sheets and the insulator between them. Advantages of sandwich panels - lightweight, environmentally friendly and economical, fast installation. In the Soviet Union, production of sandwich panels was first organized in the mid-1970s at the Chelyabinsk Factory of profiled steel decking. The developers of materials and technology for their production were Friedrich Tamplon, Vladimir Krokhalev and Alexander Chebykin - employees of the department of building structures of the Ural Polytechnic Institute (now Ural Federal University). Founded 85 years ago, today the department operates as a division of the Institute of New Materials and Technologies at Ural Federal University.

"The task of our scientific group, which was headed by Friedrich Friedrichovich Tamplon, was to create prototypes of equipment for the production of sandwich panels, get their prototypes and study their stress-strain state, i.e. find out what ultimate load can be applied to them. Before us, such studies had not been conducted in the Soviet Union. The task was successfully solved," recalls Vladimir Krokhalev.

Vladimir Krokhalev developed a furnace to produce the "stuffing" of sandwich panels made of foam, studied the impact of foam on metal profiles and made calculations of the critical loads that metal sheets of different thickness and density can withstand.

The work of Tamplon, Krokhalev and Chebykin was noted at an all-Union competition as the best research complex in the field of enclosing structures and was awarded a medal and a diploma from the Ministry of Higher and Secondary Special Education of the USSR, as well as four medals of the Exhibition of Achievements of National Economy (VDNKh).

In the Sverdlovsk region serial production of noncombustible metal wall and roofing panels with high efficiency insulation was organized jointly with Glavsreduralstroy trust and Pervouralsk plant of complete metal structures. Several buildings of Nizhny Tagil Iron and Steel Works, shops of Seversky, Sinarsky and Pervouralsky Pipe Plants, compressor buildings of six gas mains "Western Siberia - Europe", the first department store "Kirovsky" and a sports and recreation complex of the Youth Residential Complex in Ekaterinburg were built of these panels.

Later, with the participation of Mikhail Ananyin, the future Head of the Department of Architecture of Ural Federal University, Friedrich Tamplon and Vladimir Krohalev developed folding structures from sandwich panels which, when lifted by a crane, open under their own weight and form rooms for warehouses, garages, workshops, etc. The development team received an invention patent for these structural studies.

Tamplon, Krokhalev and Chebykin are all students of Boris Speransky, the founder of the Ural school of structural steel workers, who headed the department of building structures in 1960-1978. For example, Vladimir Krokhalev joined the department after three years of work on the construction of the USSR's first intercontinental ballistic missile testing complex at the Baikonur Cosmodrome.

"Boris Alexandrovich Speransky was the author of four monographs, an authoritative scientist and engineer. As a result of his efforts, the department represented a powerful educational and scientific school, which had strong connections with foreign universities. Under Speransky it trained about a thousand engineers, teachers and scientists for the construction industry of the Volga region, the Urals, Siberia and the Far East. On the initiative of Boris Aleksandrovich the department provided training of specialists in "Industrial and civil construction - metal constructions", says Vladimir Krokhalev.

Graduates of Speransky including candidates and doctors of science, defended at the department, worked and continue to work not only in Sverdlovsk-Yekaterinburg, but also in Chelyabinsk, Kazan, Ulyanovsk, Samara, Tyumen, Barnaul, Krasnoyarsk, Khabarovsk, Magadan. The most famous pupil of Boris Alexandrovich - Yakov Olkov, a classmate and a close friend of Boris Yeltsin, later - a member of the Academy of Architecture and Building Sciences, the successor of Speransky as head of the department, which Olkov headed for nearly 20 years.

Professor Speransky entered the history of science as one of the first designers and researchers of long-span prestressed steel bars with the use of metal wire ropes on rigid and flexible strands. Such structures are notable for their lightness and at the same time their particular strength and stability, ease of installation and its and increased speed, capable of withstanding considerable loads, while providing great savings of metal.

"The ropes and strings designed by another representative of the scientific school, PhD Boris Sushentsev, were so strong that at the Magnitogorsk Iron and Steel Works a multi-ton open-hearth furnace was moved entirely with their help. In addition, Boris Mikhailovich developed several types of construction ropes, as well as a one-of-a-kind stand for manufacturing and testing wire rope strings at the Nizhneisetsky metal construction plant," explains Vladimir Krokhalev.

The most famous development of Boris Speransky is the covering of the turbine hall of Reftinskaya Hydrorecirculation Power Plant, made of flat steel trusses with a span of more than 40 meters. In the manufacture of the coating the method of block assembly was applied: in this case the trusses are preassembled into large blocks, and then lifted by powerful cranes and installed in the designed position. As a wide practice of block assembling has shown the use of this method leads to a significant simplification, acceleration and improvement of the quality of assembly, saving materials, reducing labor costs and the number of personnel, reducing the cost of work.

Another unique project by Boris Speransky is a two-span spatial cover for the construction machinery parking lot on Kosmonavtov Avenue in Ekaterinburg. The spans of this structure were 54 meters. Unfortunately, it was dismantled in the 1990s.A separate function of the Ural Scientific School of Metallurgical Constructors is the expertise of the technical condition of the metal constructions of industrial and civil buildings. According to Vladimir Krohalev, such work was carried out, in particular, at the Nizhny Tagil Metallurgical Plant, the Ural Carriage Works, the Uralasbest and Magnezit plants, and in total - at more than a hundred sites.

"In the 1970s, Friedrich Tamplon and Alexander Chebykin, together with me, did an examination of the old, still Demidovsky workshops at the Verkh-Isetsky Metallurgical Plant, which revealed extremely dangerous deformations of the metal columns supporting the bridge crane spans. Thus, we not only saved the factory equipment from destruction, but also saved the lives of the factory workers," emphasizes Vladimir Krokhalev.