Residents of Egypt can prepare effectively for admission to Russian universities 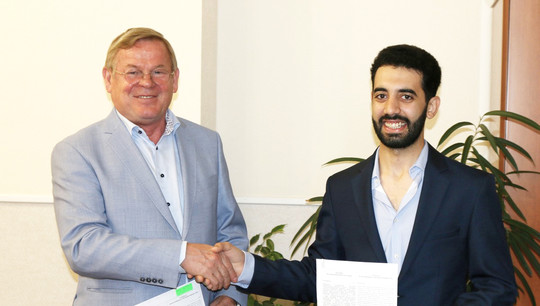 Ural Federal University and Media Arab for Media Production and Marketing Agency signed a bilateral agreement to open a Russian Language Center in Cairo, the capital of Egypt. The Center will provide Egyptian citizens with the opportunity to take Russian language courses that are designed to help Egyptian school graduates participate in the selection procedure for admission to Russian universities, as well as to take a test on any certification level of the state testing system for foreign citizens in Russian language.

The Russian Language Center, which opens in Cairo in September 2021, will also hold cultural events and introduce students and visitors to Russian culture.

Media Arab for Media Production and Marketing is solving organizational issues and preparing the place for the opening. UrFU is handling the methodological part of the course, as well as preparing teaching materials and organizing the learning process. The courses will be taught by experienced teachers from the UrFU Preparatory Department for Foreign Students (Russian Language School).In the near future, the Egyptian side and UrFU plan to open centers in other cities where there is a high demand for Russian language learning. At the moment the capacity of the center is 150 students.

The initiative to open a Russian Language Center in Egypt belonged to the UrFU Preparatory Department of Russian for Foreign Students, which annually receives hundreds of Arab students.

"In recent years, we have developed productive relationships with agents from Egypt, we see interest from students who want to get higher education in one of the Russian universities and, therefore, the need for Russian language teachers in the country. We were looking for a reliable partner in Egypt to facilitate the process of learning Russian for more students. The opening of the center will help many to enroll in universities in Russia and expand their career opportunities," said Mikhail Kopyrin, manager of the preparatory department of the Russian language for foreign students.