Skull of a Giant Ancient Hyena Found in Crimea
More

Skull of a Giant Ancient Hyena Found in Crimea

Dmitry Gimranov spoke about the significance of the new find 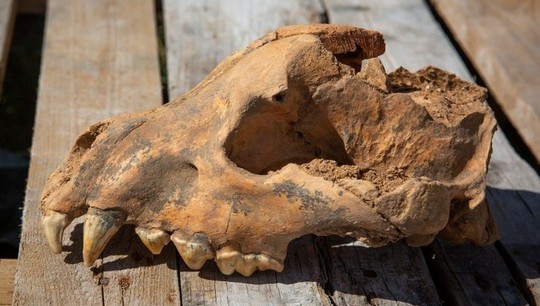 With the study of mammals, scientists will be able to characterize the natural conditions of savannahs. Photo: press service of the Crimean Federal University.

In Crimea, in the cave "Tavrida" for the first time in Europe was found almost a complete skull of a fossil giant hyena pachycrocuta. Dmitry Gimranov, a researcher from the Laboratory of Natural Science Methods in Humanitarian Research at the Ural Federal University, takes part in the joint study with the Crimean Federal University.

"The hyena to which the skull belonged occupies an intermediate evolutionary position between late European hyenas and earlier Asian hyenas. With the new findings, we have a chance to determine what position the ancient hyena from Crimea occupies on the evolutionary tree of hyenas of Eurasia," Gimranov said.

Previously, paleontologists found only fragments of skulls and teeth of the predator in Europe. The whole skull was previously found in Transbaikalia and China. Other unique specimens found this season were a partially preserved skull of an ancient lynx and a fang of the saber-toothed cat Homotherium, reaching a size of almost 10 cm.

"Finding almost a whole lynx skull also provides additional opportunities to clarify its systematic position and refine the list of saber-toothed predators of Eastern Europe in the early Pleistocene (from 1.8 to 0.8 million years old). Usually such fragile fossil objects have time to break for millions of years, and we get only fragments, so the whole fang - is also good luck," said Dmitry Gimranov.

New data on the flora and fauna of the cave "Tavrida" in the Early Pleistocene can give an analysis of the remains of rodents found there. Through the study of small mammals, plant remains and analysis of cave soils, scientists will be able to characterize the natural savanna conditions that dominated the region 1.8-1.5 million years ago.

"This season we have also made a detailed topographic survey of the cave and established its morphology in detail: all ledges, depressions and changes in relief", clarified Gennady Samokhin, senior lecturer of the Department of Geosciences and Geomorphology of the Crimean Federal University.

The research is being conducted in order to reconstruct the climate and other elements of the natural environment of the time of the formation of cave deposits before the age of great glaciations. Preliminary analysis showed that the climate in the Crimea was hot and dry. However, the parameters of natural conditions at the time of the ancient fauna habitation need to be clarified and substantiated.