New molecular features of this disease have been discovered 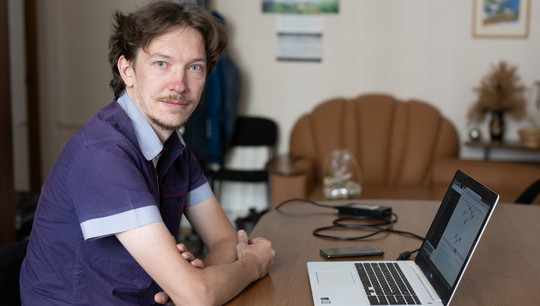 Mikhail Bolkov: "Based on the data obtained, we can predict a mild or severe course of the disease". Photo: Ilya Safarov.

Scientists at Ural Federal University, as part of an international team, have figured out how to improve the effectiveness of bladder cancer (BC) treatment. They have discovered new molecular features of the dangerous variant of this disease. According to experts, these findings will help to choose the most effective treatment option for each patient individually and minimize the risk of recurrence of bladder cancer. The study was published in the journal Hereditas.

Bladder cancer is one of the most common and deadly diseases in the world. According to data from Medline (Medical Literature Analysis and Retrieval System Online), the recurrence rate is almost 80%. Moreover, this type of cancer is the most expensive to treat per patient. Bladder cancer usually begins by affecting the mucosa of the organ, the experts explained. Two types of bladder cancer are commonly distinguished: superficial (muscle-invasive), which is less dangerous; and muscle-invasive, which is more aggressive and actively forms metastases.

The authors of the study found two important features of muscle-invasive cancer. First, it turned out that the two subtypes of this type of cancer have subtle molecular differences. Second, they found differences in the behavior and property of the cells of these subtypes. Identifying and studying these differences allows us to predict the course of the disease more accurately, change treatment tactics, and may help in the search for new drugs.

"We have calculated which molecules are relatively more or less abundant in patients at different stages and with different forms of cancer. Based on these data, we can predict a mild or severe course of the disease, as well as determine which features are inherent in patients with a particular subtype of cancer: gender, age, smoking, disease course, form of cancer, different clinical parameters," commented Mikhail Bolkov, a senior researcher at the Ural Federal University Department of Immunochemistry.

Ural Federal University scientists were able to determine which molecules are present in this or that form of cancer, which genes are more active "working and not sleeping". The specialists also studied the processes of interaction between molecules inside the cell and found genes and immune system cells involved in the pathological process of genes. Bioinformatics methods were used in the work. This is a mathematical analysis of the vast amount of data accumulated by different physician-researchers in international databases open to researchers.

The results of the study can be applied to the laboratory search for the markers found, to know in advance whether an expensive immunotherapy, a traditional or an alternative treatment for his form of cancer will help the patient. In the future, the authors plan to delve deeper into the research on this problem and try to apply the developed strategy to other diseases.