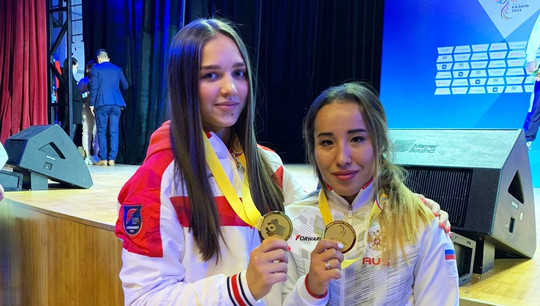 Anastasia Sidelnikova and Maria Tyumerekova are first-year students. Photo from the archives of the athletes.

The first CIS Games are held in Kazan from September 4 to 11. The program of the Games included wrestling competitions. Ural Federal University students Anastasia Sidelnikova (59 kg) and Maria Tyumerekova (50 kg) became champions in the national team of Russia.

"It was very happy to compete in these competitions and win. Especially when you consider that these are the first such games among the CIS countries. It's an incredible pride to write oneself into the history in such a way," Maria Tyumerekova shared her impressions.

Besides, Nozimdzhon Sobirov, student of UrFU, took part in Greco-Roman wrestling competitions in the category of 67 kg as a member of the national team of Tajikistan and placed sixth.

More than 1,100 athletes (aged 14-23) from nine countries of the CIS are registered for the Games. The competitions are held for the purpose of strengthening traditionally formed friendly relations between peoples and practical realization of the Agreement on cooperation in the field of physical training and sports of the Commonwealth of Independent States.