Scientists Have Created a Perovskite LED with the World's Longest Lifespan 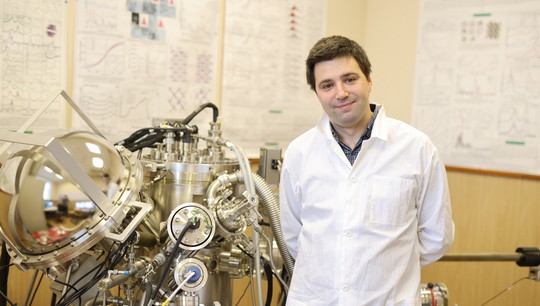 Scientists from China and Russia have developed the architecture of red-emitting perovskite LEDs (PeLEDs) that minimize optical energy loss and significantly increase their efficiency and longevity. The work opens up the potential to create high-performance LEDs for lighting devices, TV displays, computers, tablets, smartphones and other electronic devices. Their advantages are energy efficiency and, at the same time, high brightness and long operating time. A paper outlining the content and results of the research was published in Advanced Functional Materials.

As a rule, optical energy losses occur in perovskite LEDs with a flat structure of interlayer interfaces. This is due to reflection and partial absorption by the functional layers of the LED (perovskite, hole-transport, electron-transport layers and the glass layer) of quanta of light - photons.

"Our research team solved the problem by modifying the organic perovskite emitter PeLED and its light-emitting nanostructures. Thus, the surface of the LED was complicated by a certain order of numerous "patterns" - "hemispheres" several nanometers high. This led to a significant improvement in light output and, consequently, to a significant reduction in re-absorption of photons," explains Associate Professor of the Department of Electrophysics at Ural Federal University, research participant and co-author of the article Ivan Zhidkov.

When the light output increases, the voltage of electric current required to provide the brightness of the LED can be reduced. Therefore, when a smaller number of photons are absorbed, the so-called joule heating - heat generation inside the LED device, which is caused by the electric current - also decreases.

It was found experimentally that the peak quantum efficiency (the ratio of energy invested to energy output) of the LED device with a patterned surface - 21.2% - is twice as high as that of the LED with a flat surface. At the same current voltage, the modified LED shines almost 2.5 times brighter, and its period of productive operation is 1.75 times longer.

"At a wavelength of 666 nanometers and an initial luminosity of 100 candel/square meter, the resulting peak quantum efficiency of the modified LED was observed for nearly 4807 hours. This is the longest high performance lifetime compared to similar PeLEDs available in the world. For example, the lifetime of the LED with the same brightness parameters and efficiency of 21.3% is only 5 minutes. The efficiency of the LED, whose lifetime at a similar brightness is 694 hours - 6.2%," emphasizes Ivan Zhidkov.

In addition, an article published by the same research team in the journal Advanced Science, describes the process of creating a new high-performance PeLEDs with sky-blue radiation. The method of obtaining these LED devices is simple and efficient, and the LEDs themselves have large for this class of devices (100 and 400 mm2) and a significant peak quantum efficiency - 9.2% and 6.1%, respectively.

LEDs (light-emitting diodes) are semiconductor devices that create optical radiation by passing an electric current through them. Perovskite light-emitting diodes (PeLEDs) are promising devices for next-generation lighting and display applications. Their promising characteristics are manufacturability and cost-effectiveness, high photoluminescence quantum yield and particular brightness, and environmental friendliness. However, despite the rapid development of perovskite LEDs, their widespread practical application is delayed by the problem of insufficient long-term stability. Due to the temperature increase caused by joule heating and other reasons, the period of continuous productive operation of PeLEDs is limited to hours or even minutes.