Developments will be used to protect details of Baghdad power plant 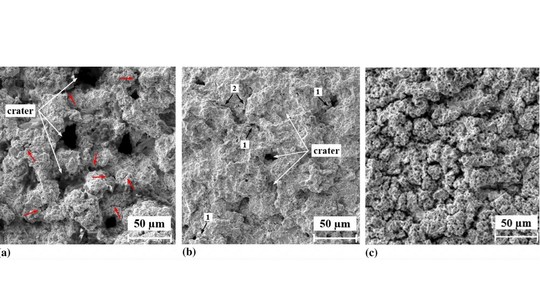 The WC-20CrC-7Ni coating is characterized by high anticavitation resistance, an international team of scientists from the Institute of Metal Physics of the Russian Academy of Sciences (Ural Branch) and Ural Federal University with the participation of colleagues from Estonia and Iraq think. Consequently, the treatment of various mechanisms working in the aquatic environment with this coating can prolong their productive life, ensure reduction of material losses, increase reliability and operational safety. An article describing the research and its results was published by the co-authors in the Journal of Thermal Spray Technology.

"We compared the cavitation behavior of WC-20CrC-7Ni with the response to similar exposure to another coating with the presence of cobalt - WC-10Co4Cr. It turned out that the anti-cavitation resistance of WC-20CrC-7Ni was significantly higher: on the steel coated with a layer of WC-CrC-7Ni, the damage zone was two or three times smaller, and the deformations themselves were an order of magnitude smaller. We attributed the difference to the characteristic features of WC-20CrC-7Ni - high chromium and nickel content, more homogeneous and flat fine-grained material structure, higher plasticity of the nickel-based matrix, almost complete absence of pores and lower roughness of the coating surface after spraying. In addition, the fine structure of WC-CrC-Ni increases the specific surface area of carbide particles, so additional energy is required for crack formation," says Yury Korobov, chief researcher at the IPM Ural RAS, professor of the Department of Welding Production Technology at UrFU.

Another way to increase the cavitation resistance of steel is described by the research team in the journal Surface and Coatings Technology. In their time, the predecessors of scientists from IPM Ural Branch of RAS and UrFU academician Vissarion Sadovsky, professors Ivan Bogachev and Mikhail Razikov established: if in steel there is such a component as unstable or metastable austenite, then under strong loading it is converted to martensite, the strongest state. This is accompanied by an increase in hardness, a change in stress state, and dissipation of external energy for the conversion of austenite to martensite. All of these phenomena, affecting each other, transform the steel so effectively that it is much easier to withstand subsequent shocks.

"Our research team applied the described effect to the development of an original Fe-Cr-C-Al-Ti type flux-cored wire, for which Ural Federal University has a patent. We tested the welded wire layer for resistance to cavitation. Already after one hour the martensite phase was almost half the volume of the layer, and after three hours it was almost three quarters. Then the process of transformation of austenite into martensite stopped, but the hardness of the sample continued to increase. At the end of the tests the layer was not seriously damaged, "getting off with" a small number of cracks and a slight increase in surface roughness," says Yuri Korobov.

"With the help of this unit we evaluated resistance of typical cavitation-resistant materials: high-chromium steels, metastable and stable austenitic steels, metal matrix composites with chrome and tungsten carbides. On the basis of metallographic, X-ray and phase studies, surface profilometry and scanning electron microscopy, the reasons for the differences in cavitation resistance of solid materials and their coatings obtained by modern methods of cladding, arc metallization and supersonic gas-air spraying have been analyzed," adds Yury Korobov.

Professor Korobov emphasizes that the comprehensive work of the international research team to improve the cavitation resistance of steel was aimed from the very beginning at achieving practical results. The first of these has been achieved. Due to the participation of Hussam Lefta Alwan, a postgraduate student from Iraq who is studying in the Ural Federal University under an intergovernmental agreement, there is an agreement to use the developments to protect parts from cavitation in one of the power plants in the Iraqi capital, Baghdad.

A specific type of damage is cavitation damage that occurs when moving in high velocity liquid media. When cavitation (formation of bubbles and cavities), there is a sharp change in pressure. This is accompanied by heating of the gas inside the bubbles up to 1500 °C, high pressure shock waves (up to 1500 Megapascal) and release of micro liquid jets, the velocity of which can reach several hundred meters per second. Destructive consequences of cavitation noticeably affect the condition of critical equipment parts in power engineering, metallurgy, shipbuilding (hydraulic turbine blades, pump impellers, valves, marine propellers, etc.).