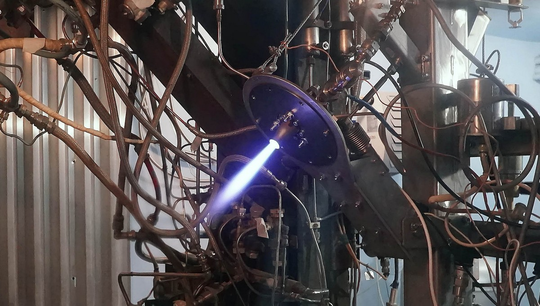 A demonstration launch of the propulsion system for a reusable single-stage launch vehicle was successfully held at the site of the Research Institute of Mechanical Engineering in Nizhnyaya Salda. The project is implemented as part of the Ural Interregional Research and Education Center (UIREC) Advanced Industrial Technologies and Materials.

Demonstration launches of the center-body propulsion system consisting of 16 liquid fuel rocket engines that are integrated into a single system were performed at the site of the Institute of Mechanical Engineering. In addition, the control system was tested and fragments of the fuel tank made of composite materials under development were demonstrated. There are very high requirements to composite materials in the aerospace industry, and the developments of the South Ural State University meet these requirements.

"I would like to express my huge gratitude to the Governor of Chelyabinsk region Alexey Teksler because he believed in this project, supported it, allocated funds to finance the work. Without this, our efforts would have had a completely different result. Today, we have gathered a large team of scientists and testers. We have a good well knit team and I am sure that going forward we will have great success," notes Sergey Vaulin, the Vice-Rector for Scientific and Educational Centers and Complex Scientific and Technical Programs of SUSU.

According to the plans, the single-stage launch vehicle will be fully reusable, which will ensure its reusability. Work on the project is being conducted jointly by SUSU, the Machine Building Research Institute (Nizhnyaya Salda), the Academician V. P. Makeyev State Rocket Center (Miass), and the Academician N. A. Semikhatov Scientific and Production Association of Automation (Ekaterinburg).

"This is one of the main technological projects of UIREC both for the Chelyabinsk region and the whole Urals. There are very ambitious plans for its further implementation. It is extremely important to successfully fire test the project on the basis of an industrial partner. The fate of the project largely depends on Roscosmos, its needs and requirements for such development. It is already clear that the Ural scientists in this field have world-class competences. The project is being implemented according to the terms of reference and by the management of Makeyev State Research Center, where they highly appreciate what has already been done," emphasizes Igor Manzhurov, Director for Development of UIREC.

Igor Manzhurov expressed confidence that in the future the competencies of scientists from Ural Federal University will also be involved in this project.

"In particular, UrFU's contribution can be in the field of materials science - one of the best materials science schools in the country is here. There is a lot of teamwork ahead, because the UIREC space is a single platform for both science and education," added the Director for UIREC Development.

The Ural Interregional Research and Education Center "Advanced Industrial Technologies and Materials" was created as part of the national project "Science" to conduct world-class applied research and development. The center participates in obtaining competitive technologies and products and their commercialization as well as training personnel. Leading universities of the Sverdlovsk, Chelyabinsk, and Kurgan regions - UrFU, SUSU, and KSU - take an active part in the development of UIREC.