Anton Vasyunin: "There Are Chances to Find Life even on the Planets of the Solar System"
More

Anton Vasyunin: "There Are Chances to Find Life even on the Planets of the Solar System"

Astrochemist talks about molecules in space, experiments and the scientist's work in Ekaterinburg 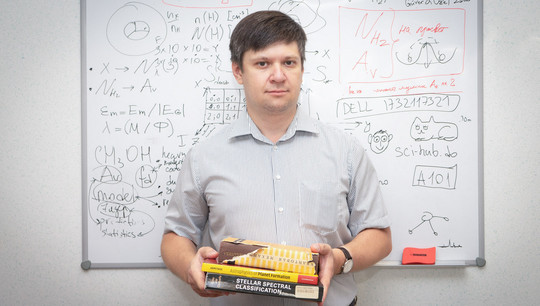 Anton Vasyunin began his interest in science because of his math teacher. Photo: Itsmycity.ru / Arina Tomashova.

It's My City together with the company "Brusnika", which also likes to invent, launches a special project about Ural scientists. In the first material, Anton Vasyunin, head of the Scientific Laboratory of Astrochemical Research at Ural Federal University, talks about the complex chemistry that can testify to life outside the Earth. He showed the experimental setup with which space conditions are created and described the process of forming a scientist's salary.

"The scientific search for extraterrestrial life is led by chemistry."

Astrochemists aren't looking for green men, they're exploring the chemistry in space that can lead to the formation of complex molecules - potential building blocks from which amino acids, sugars and proteins can be put together. In essence, we are trying to understand how chemical compounds are formed in the harsh conditions of space, which may then be involved in the emergence of something living. For example, it has already been proven that glycine can be produced in total darkness, without starlight and at very low temperatures. And this amino acid is an important building block for the life we know.

In addition to searching for extraterrestrial life, astrochemists also study different chemical reactions in space conditions and conduct experiments that replicate these conditions on Earth.

The fact is that there are a number of molecules, which although formed on our planet, but almost immediately due to the density of the atmosphere is destroyed. In space, however, there is no atmosphere, so nothing interferes with these molecules there. Such chemical processes occurring at very low temperatures and practically in a complete vacuum, in a very rarefied gas-dust mixture are very poorly studied. And very interesting for professional researchers.

The study on glycine, which I already mentioned, was conducted jointly by scientists from different countries: there were specialists from Great Britain, the Netherlands, Germany, the United States, and Russia. This included Gleb Fedoseyev from our lab. The international group of scientists worked on the experiment for more than a year, they interpreted the results, held internal discussions, then waited for the evaluation of several reviewers. A description of the study can be read in the journal Nature Astronomy.

Before the article came out, it was thought that glycine was formed only under the influence of cosmic rays and ultraviolet radiation: scientists believed that some kind of energy was needed to form organic molecules. And the study we are talking about has experimentally confirmed that energy is not necessary. In fact, all of this is an internal discussion, understandable only to specialists. But its result was the hypothesis that amino acids, the most important building blocks of life, can appear without stars, and therefore may be more abundant than previously thought.

Vacuum and -263°C: Why create cosmic conditions in the laboratory

The study of glycine formation took place on the equipment of Leiden University, which simulates space conditions. For the last six months, a similar, but more modern experimental facility has been assembled in our Ural Federal University laboratory. With this mechanism, we will be able to conduct entire classes of similar experiments and investigate the formation of many other complex substances. On the one hand, we are also interested in the simple compounds that make up interstellar ice: there is both ordinary water and carbon dioxide. On the other hand, organic compounds that are involved in the chemistry that may lead to the origin of life.

The key elements of our setup are the pumps that create the vacuum. Making the density of atoms on Earth equal to the density of atoms in space is no easy task. First, the pre-vacuum pumps reduce the pressure by a thousand times, and then the turbomolecular pumps remove the last atoms of the gases. It takes about three days to pump out the entire contents of a five-liter chamber. The desired temperature inside will be created with a cryostat - it cools the chamber to -263°C. In the chamber itself, we'll put a substrate whose surface is similar to that found on cosmic dust particles. It is believed that it is on the ice-covered particles of cosmic dust that the most interesting chemical reactions take place. Then we will put special compositions inside and see with other equipment what kind of chemical reactions will happen there.

The origin of life in the universe is one of the most interesting, complex and interdisciplinary questions in science. Many facts have already been accumulated, which are gradually putting together a consistent picture, but, of course, with many gaps.

One of the main mysteries is still considered to be the process of the emergence of the first single cell. It is not clear how it happened that all the important chemical elements formed organelles, gathered together, surrounded themselves with a protective shell and began to work together. But I am sure, judging by the way science has evolved before, that one day we will understand this too.

I am also convinced that extraterrestrial life exists. At least on the simplest level. The sun is an ordinary star, Earth is apparently an ordinary planet. There are millions of them in our galaxy alone, and there are billions of similar galaxies in the universe. So I don't understand why we should think that we are so unique. There are chances of finding life even on planets in the solar system. Maybe something will be found on Mars. On Enceladus (Saturn's satellite), there is probably a whole ocean under the ice column. Another thing is highly evolved civilizations. It is possible that there are some. The only question is why they are silent and not phoned by radio emissions of their telecasts in all directions. It is possible that civilizations like ours do not live very long: a couple of tens of millennia, which is not a very long time for a universe that is over 13 billion years old, then such civilizations die and do not overlap in time with others.

A full interview, in which Anton Vasyunin talked about the purchase of equipment, the salary of a scientist and the bureaucracy in the education system, is published on the portal It's my city.