Mikhail Rutkevich Created One of the Country's Foremost Schools of Philosophy

A story about the Ural Philosophical School, its founder and alumni 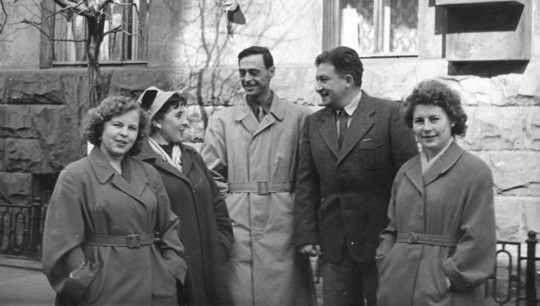 Mikhail Rutkevich (second right) with colleagues from UrSU (now UrFU) in the 1950s. Photo: Department of Philosophy of the Ural Federal University.

We continue our series of publications devoted to the university's 100th anniversary. This time we will talk about the Ural Philosophical School, one of the country's most outstanding, and its founder, Mikhail Rutkevich.

Best in the Soviet Union

"Few people remember now, but applicants in the first intake had to take, in fact, a mathematics exam, which was introduced over and above all official examinations and was called the mathematics interview. Applicants who did not pass this examination were not allowed to register under plausible pretexts," says Professor Nadezhda Bryanik of the Department of Ontology and Theory of Knowledge at UrFU.

Through Rutkevich's efforts, students received not only a fundamental philosophical education.

"The program and curriculum of the Ural faculty differed significantly from those of the philosophical departments of Moscow State University and Leningrad State University. I was convinced that in the twentieth century, a philosopher should be a broadly educated, erudite specialist in science and culture," explained Mikhail Nikolaevich, who educated students "in his own image and likeness".

Rutkevich invited "stars" of Ural and Soviet science to read his courses: Academician Stanislav Schwartz, founder of the Ural Scientific School of Population and Evolutionary Ecology; Adolf Mokronosov, organizer of the Ural Scientific School of Plant Physiology and future Academician; Mikhail Suyumov, founder of the Ural School of Byzantinology; and his future successor, Margarita Polyakovskaya, the first dean of the Mathematics and Mechanics Department Nikolai Sesekin, famous astronomer and creator of the Kourov Observatory Klavdia Barkhatova, author of popular school and university textbooks on physics Abram Kikoin, future writer and chief editor of "Ural" magazine Valentin Lukyanin and many others. And already in the first graduating class of students of the faculty, half of the composition later defended doctoral dissertations.

"Another essential difference of the Ural School of Philosophy is the close connection between research and practice. In this way, the desire of the school's leaders - Mikhail Rutkevich and his closest associate, Professor Isaac Loifman (also a physicist by the way) - to make philosophy useful to society was put into practice", Nadezhda Bryanik continues her story.

Even before the creation of the department, a sociological laboratory had been set up at the university's Philosophy Department headed by Rutkevich. Thus, Mikhail Rutkevich responded to the need to understand what constituted Soviet people and Soviet society during the Thaw. Research examined the correlation between the life aspirations of young students and the quality of the educational system, the laboratory participated in drawing up plans for the social development of enterprises, industries, cities and regions, and later these plans were used throughout the country. Largely thanks to Rutkevich, who headed the Ural branch of the Soviet Sociological Association, Sverdlovsk became a major center of Soviet sociology. It was with these achievements in mind that Mikhail Nikolayevich was invited to serve as director of the Institute of Sociological Research at the Academy of Sciences in the early 1970s.The practice of giving lectures on social and political subjects (at factories, collective and state farms, military units, research institutes, state institutions) and training sessions (in schools and institutions of higher education) was also a valuable experience - for students and graduate students - and useful to the people of the Urals.

"Rutkevich believed that a specialist working with the word should be able to convey his position to any listener, convincingly and intelligibly. Naturally, some graduates of the faculty, such as Gennady Burbulis and Anatoly Gaida, became professional politicians, while Lyudmila Andryukhina, Natalia Kozheurova and Alexander Lobok proved themselves as authors of innovative educational programs," Nadezhda Bryanik stresses.

Graduates of the Ural School of Philosophy have been readily accepted by the best universities and research centers in the country. Mikhail Rutkevich himself has produced 25 PhD students during his years at Ural State University, and the entire Soviet Union was eager to get his Ph.

"The competition was quite considerable, most of the applicants were teachers of philosophy courses at universities with considerable theoretical and practical training. There were graduates of the philosophy departments of Moscow State University, Leningrad State University, and the mathematics and mechanics, physics, chemistry, biology, and history departments of UrSU," states Nadezhda Savtsova, PhD in Philosophy.

A man of strong will, authority and strictness (another nickname - "autocrat"), an outstanding intellectual, artistic nature, Mikhail Rutkevich had the right to demand eloquence from his students and graduate students. He himself, the author and teacher of a two-year course on dialectical materialism, was a brilliant lecturer, polemicist, stylist, possessor of a sharp mind, phenomenal memory, excellent literary speech - argumentative, confident, graceful.

"I constantly experienced an aesthetic high: so perfect logically, compositionally, linguistically, intonationally, socially, were his lectures. Absolute mastery of the material and the form of presentation, the freedom that transformed before our eyes into a coherent, well-thought-out and expressive artistic statement. For me, this was not only beauty, but also charm," said Lev Zaks, Rector of the Humanities University and Chair of the History of Philosophy, Philosophical Anthropology, Aesthetics, and Cultural Theory Department at UrFU, sharing his memories.

The dean's appearance was appropriate for his speech: Mikhail Nikolaevich always dressed smartly. The same was true of Rutkevich's impeccably logical and evidentiary scientific work.

The textbook Dialectical Materialism, prepared on the basis of lectures read by Mikhail Rutkevich at UrSU, was released from the ideological clutches of the scholastic, speculative demagogy of the Stalinist period. According to Konstantin Lyubutin, this was "the first textbook to contain a consistent scientistic interpretation of the philosophy of Marxism. Rutkevich contrasted the dogmatic approach to Marxism with a creative one, as was then said.

"It was this direction, which asserted the necessity of scientificity, including verifiability and provability of philosophical ideas and their indispensable reliance on scientific knowledge, that turned out to be the intellectual force to a large extent the task of practical rehabilitation and legitimization of the newest sciences, which had been obscurately persecuted by Stalinism: genetics, cybernetics, quantum mechanics, biophysics, information theory, semiotics," notes Lev Zaks.

In addition: this historical mission of Mikhail Rutkevich's theory and textbook was fulfilled not only in the Soviet Union, but also in other countries of the socialist camp.

"I became an adherent of Marxist theory and the socialist reorganization of society by the age of 16," Mikhail Nikolayevich reported in his autobiography. A child of his time, Rutkevich, of course, up to the end of his life stood on the positions of dialectical materialism and Marxism.

Mikhail Rutkevich's pedagogical and methodological legacy helped his students to find their bearings in the difficult transitional period of the post-Soviet period: the search for philosophical approaches to real life and practice led the Philosophy Department of UrSU, the first in Russia, to specialize in philosophy of law-making and human rights. The Faculty's partners are the Regional Legislative Assembly, the Office of the Commissioner for Human Rights in the Sverdlovsk Region, and the regional judicial system. For the first time in our country a Philosophical Dictionary on Human Rights was prepared and published.

"The educational and research capital bequeathed by Mikhail Nikolayevich Rutkevich not only does not lose its relevance, but only increases it. At the distance of the epochal technological transition, the emergence and development of information, digital, cognitive technologies - the Internet, artificial intelligence and artificial neural networks, machine learning, and so on - the need for philosophical understanding of the possibilities of consciousness and cognition is stronger than ever. Mikhail Nikolayevich always had his finger on the pulse of the latest scientific discoveries and introductions, went towards them, comprehended them, their prospects and significance for mankind and the motherland. We are following Rutkevich's path even today," concludes Nadezhda Bryanik.