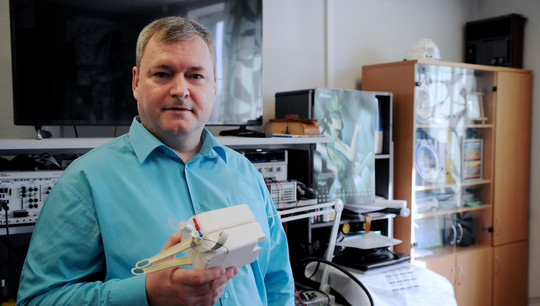 In the hands of Oleg Plokhykh, the developer, a prototype of the device, which is located in the institute. Photo: Vladimir Petrov

March 23 is World Meteorology Day. Scientists of Ural Federal University are directly related to it. We tell about the history of Ural Federal University researchers creating the first domestic navigation system for radiosonding the atmosphere, which is widely used in the network of Roshydromet, as well as in preparing rocket launches from Baikonur and Vostochny cosmodromes.

In our country up to 90% of the information intended for weather and climate forecasts, space rocket launches and other needs is supplied by radiosonde systems (RS). These systems monitor meteorological parameters of the atmosphere with the help of aerological radiosondes (ARS), which are launched into the Earth's stratosphere, to 50 km altitude.

In the 1990s, there was a need to improve the design of domestic airborne radiosondes and the ground radar stations (radars) that determine their coordinates. In order to improve the operational characteristics of the equipment and increase its competitiveness, the Engineering School of Information Technologies, Telecommunications and Control Systems staff developed the small-size Briz radar. Its demonstration at international exhibitions in Lindau (Germany) and St. Petersburg in the fall of 1997 was so successful that it eliminated the need to buy foreign equipment.

The experience of Briz radar was used in the development and production of a new radar complex Vector-M at the Vector Scientific and Production Association (Ekaterinburg). It works with semiconductor radiosondes of MRZ-3 type, which were also created based on the developments of UrFU scientists. Later this type of radiosondes was modernized, and now they are serially produced at the Radium enterprise (Kasli, Chelyabinsk Region).

"The advantages of the Briz and Vector-M complexes, compared with previous models, were a significant reduction in radar emission power, their mass and dimensions, the use of modern element base and digital methods of processing radio telemetry information. At present more than 50 Vector-M complexes are in operation in Roshydromet network", explains Oleg Plokhikh, complex developer, senior lecturer, engineer of the first category of the Faculty of Radio Electronics and Communication of UrFU.

At the same time, at the end of the 1990s, the institute's specialists, on their own initiative, conducted research on the creation of a domestic radiosonde system (RS). In 2000, at the Russia Arms Expo exhibition in Nizhny Tagil, they demonstrated a simplified model of a radiosonde with a navigation module. In the fall of 2009, they successfully tested the country's first operational mockup of a radionavigation system at the Verkneye Dubrovo air station in the Sverdlovsk region.

On Earth and in Space

The experience accumulated while creating the Briz and Vector-M systems came in handy in 2010-2012. Then, in accordance with RF Government Decree № 218, specialists from the Ural Federal University and Radiy enterprise implemented the project "Development and production of technical means of radio sounding of the atmosphere based on satellite navigation systems GPS/GLONASS in order to modernize the technological base of the aerological network of Roshydromet". They have developed and launched serial production of the first domestic navigational air sounding system "Polyus" and airborne navigational radiosonde MRZ-H1.

In 2011, at the stage of creating a prototype of the Polyus radiosonde system, the Center for Ground-Based Space Infrastructure Operation (Moscow), which is responsible for the operation and construction of the Baikonur and Vostochny cosmodromes, expressed interest in the development. In November of the same year the Polyus RS was successfully tested at the Yuzhny launching site (Baikonur). To prepare space rocket launches, the first prototype and then the first production sample of the Polyus RS were installed at the Baikonur Cosmodrome.

"The Center for Ground-Based Space Infrastructure Operation specialists immediately appreciated the potential of the new system, its mobility, ability to work in the field, quick deployment, reliability, and ease of maintenance. Together with Radium specialists, we promptly finalized the functionality of the specialized software of the radio sounding system taking into account the recommendations of the Center," recalls Vyacheslav Ivanov, professor of the Department of Experimental Physics of UrFU.

On the initiative of the Center for Ground-Based Space Infrastructure Operation and the efforts of UrFU, Radium and Vektor, the Polyus radiosonde system was further developed. As a result, two stationary Polyus-S systems and one mobile Polyus-M system (the latter as part of a mobile airborne complex created by Vektor company on the basis of a KAMAZ truck) were delivered and tested at the Vostochny Cosmodrome in 2015. After comprehensive tests, the Polus RS was introduced into the structure of meteorological support of the Vostochny cosmodrome and participated in the preparation of the first launch of the Soyuz-2 rocket on March 28, 2016.

During 2016-2021, the Polyus radiosonde system was supplied to 22 aerological stations of Roshydromet, including two stations in Antarctica.

"To date, the results of their use under real conditions have been obtained and processed, and refinements have been made to improve performance characteristics. The aerological preparation of all rocket launches at Baikonur and Vostochny cosmodromes is carried out by the Polyus RS equipment and MRZ-N1 radiosondes," concludes Oleg Plokhikh.

Since the establishment in 1935 of a network of stations for regular radio sounding of the atmosphere, the Soviet Union has been a leader in the creation of modern technical means of aerological observation.

A specific feature of domestic radiosonde systems is the determination of the coordinates of aerological radiosondes (ARS) using radar stations (radars). Superregenerative transceivers operate in a special mode of signal generation, in which one active - tube or semiconductor - device transmits a telemetry signal, receives a radar request pulse and responds to this request pulse.