16 Heroes of the Soviet Union, Hundreds of Thousands of Lives Saved
More

16 Heroes of the Soviet Union, Hundreds of Thousands of Lives Saved

Stories about the university's contribution to Victory in 1945 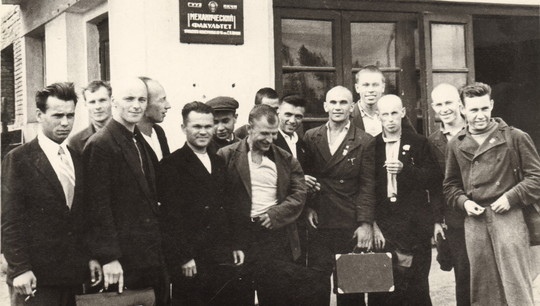 Students of the Ural Polytechnic Institute (now Ural Federal University) before being sent to the front. Photo: Archive of the UrFU Museum and Exhibition Complex

During the Great Patriotic War about 2400 teachers and students left the Ural Industrial Institute and Sverdlovsk State University (after war - Ural Polytechnic Institute and Ural State University) to the front. Many of them had just passed the final examinations, a significant part - volunteers, having refused the "reservations". More than 300 of them died.

"For the rest of our lives we remembered an old worker standing on the side of March 8 Street. Wearing a uniform cap, with St. George crosses on his belted shirt, he stood at attention, looking intently at us with his hand under his visor. We all suddenly felt that it was the Working Ural who was seeing us off and wishing us good luck," recalled Ivan Milaykin, a power engineer.

Those who remained at the home front performed feats of labor during the harvest, were on duty in hospitals, and participated in the construction of urban infrastructure - waterworks, power plants, sidewalks, streetcar and trolleybus lines. At the same time they studied, learning, among other things, military regulations, small arms, tactics of hand-to-hand combat and tank destruction. By the end of 1941 the Industrial Institute alone trained about 2,500 military skiers, marksmen, snipers, machine gunners, radio operators and nurses. They mastered the technology of ammunition production, special machines for making weapons, and the art of fortification.

"The buildings were poorly lit and heated, and it was not uncommon for professors, interrupting classes, to suggest that students run down the hallway to get warm," the university's history notes read.

Classes ended at one o'clock in the morning. Until morning students were busy unloading trains with the wounded, wagons with coal and peat. There were only a few hours for sleep, while they were kept awake they were starving.

The university buildings housed not only the Moscow State University and the Zhukovsky Military Air Academy. The evacuated research institutes and factories were also located here: Moscow Ammunition Plant No. 217 (later the Ural Optical and Mechanical Plant), a branch of the Leningrad Electromechanical Plant. In the hallways of the academic buildings there were ready-made military products - mortars, parts for Katyusha rockets, projectiles.

"All for the Front, All for Victory!"

Teachers and students of the Ural Industrial Institute, the largest Soviet technical university during the war, seconded to the factories of Sverdlovsk and the Urals, used their knowledge to transfer production facilities from peaceful to military rails, to create, set up and improve the technology of production for the front.

"In the House of Technology, which arose at the Ural Industrial Institute and united scientists and engineers of different directions, the technology of production in conventional open-hearth furnaces of high-quality steels for the tank industry was created, substitutes were found for acutely scarce materials, new ways of manufacturing and processing shells, complex parts and units of aircraft, tanks, artillery guns were introduced. During the war the House of Technology helped 400 factories and construction sites", told Nikolay Selivanov, front man and author of numerous works on the history of our university.

In 1942, at the initiative of Isaak Postovsky, professor of the Department of Organic Chemistry and future academician, production of sulfidine was opened at the Sverdlovsk plant of medical preparations. Synthesized by Ural scientists in the late 1930s, this antibacterial agent is related to streptocide, but surpasses it in effectiveness in healing wounds, burns, and wound infections. The discovery of Postovsky and his colleagues saved the lives of hundreds of thousands of soldiers. Already after the war the merits of the department were awarded the Stalin Prize.

The contribution of Sverdlovsk scientists and engineers, students and university employees to the victory - thousands of parcels to the front-line soldiers, millions of rubles of donations, including the creation of artillery battery named after three Heroes of the Ural Industrial Institute Nikolay Anikin, Vladimir Badyin and Nikolai Syromyanikov, for the construction of tank columns "Sverdlovsk", "Sverdlovsky Komsomolets", "For Advanced Science".

"They say that metal is the bread of industry. Extracting maximum opportunities from metal in the name of the Victory became one of the main tasks of economy and science of the war years. A large part of its implementation fell on the shoulders of the scientific staff of the Faculty of Metallurgy," Nikolay Selivanov noted.

With the active participation of Akim Golovin, head of the Rolling Department and outstanding metallurgist, at the very beginning of the war the technology of making especially strong armor steel was developed and introduced at the Magnitogorsk Iron and Steel Works. At Revda Metalware and Metallurgical Plant under Golovin's supervision the production of high-strength electrode wire for welding was organized, which was badly needed for production of tanks and self-propelled guns. With the help of Golovin the production of high quality rifle and artillery shell casings and rolling pipes for mortar barrels was organized.

Akim Golovin's students created a technology for rolling a low plastic alloy in a copper shell for reconstructive surgery and developed a method of producing a shell billet by cross-rolling. They also secured the production of ribbon for the manufacture of small parts of aeronautical instruments from the chemically complex alloy Invar. To help our metallurgical colleagues, Irina Bogacheva, an electrical engineer, was the first in the world to create a special type of mesdose, a special measuring device for studying the power parameters of rolling.

Employees of the Steel Metallurgy Department helped steelmakers of the Nizhniy Tagil Iron and Steel Works to master and increase production of special grades of steel. With the contribution of the Department of Foundry Production, the Ural metallurgists improved the quality of cast iron and mastered the production of car wheels and ammunition.

Through the efforts of specialists of the Department of Heavy Non-Ferrous Metals 1.5-2 times increased the productivity of shaft furnaces at Ufaley and South Ural Nickel Combines, tank industry has received significant additional volumes of this highly scarce metal. In addition, the department solved the problem of increasing the production of cobalt and copper at the enterprises of Chelyabinsk and Karaganda regions.

The Department of Metallurgy of Light Metals proposed a method of processing bauxite, which made it possible to expand the raw material base of enterprises for smelting aluminum, the basic material in aircraft construction. During the war years, aluminum production grew several times over. Under the leadership of Oleg Yesin, professor of the Department of Electrochemical Production Technology, the Pyshma Copper Electrolyte Plant established the production of copper powder for tank and aircraft engines.

Heroes of War, Knights of Science

Many scientists of the Ural Industrial Institute and Sverdlovsk State University received state awards for their contribution to the Victory, including the highest award - the Order of Lenin.

16 students of Ural Industrial Institute and Sverdlovsk State University were awarded the title of Hero of the Soviet Union, six of them posthumously, including the legendary scout Nikolay Kuznetsov. Two Heroes who returned from the front, Nikolay Anikin and Vladimir Badyin, studied in the same group of the Faculty of Engineering and Economics. Anikin in the postwar period taught at his native faculty, Badyin held senior positions, first at Uralmashzavod, then - in the central office of the KGB.

Hero of the Soviet Union, participant of the Victory Parade Nikolay Syromyatnikov entered the history of Ural science as the founder of the Department of Theoretical Thermal Engineering, Vice-Rector of the Ural Polytechnic Institute. Boris Rossokhin, Hero of the Soviet Union, graduated with honors from Physical Engineering after the war and, from the late 1960s, worked as deputy director of the Institute of High-Temperature Electrochemistry, Ural Branch of the Academy of Sciences.

Fyodor Zaostrovsky, Chief of Staff of Mortar Battalion, who met the Victory in Berlin in 1966-86, was the rector of the Ural Polytechnic Institute. Participant of the Victory Parade Ivan Nichkov was Vice Rector for Academic Affairs. Another participant of the Victory Parade, Nikolay Konovalov, in peacetime was awarded the State Prize of the USSR and the title of Honored Inventor of Russia. Pavel Geld, head of division artillery reconnaissance, returned from the front, later became head of the Physics Department and was elected member of the Academy of Sciences of the USSR. Victor Dutov, a telegrapher of the North Sea Fleet, taught at the Chemistry Faculty, in the late 1960s organized the institute's recreational running club and took first place among veteran athletes at the Moscow International Peace Marathon in his 70s.