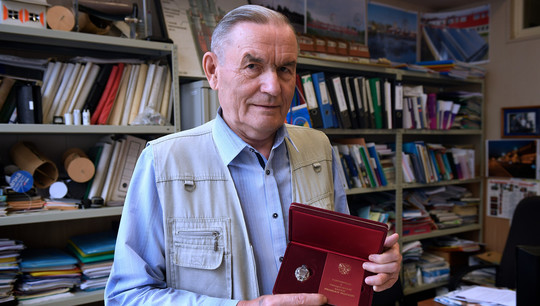 130 patents for inventions in various scientific and technical areas - this is the unique result of more than half a century of inventive activity of Aleksandr Popov, Associate Professor at the Department of Nuclear Power Plants and Renewable Energy Sources (Ural Power Engineering Institute) of UrFU. At the end of last year Aleksandr Popov was awarded by the President of Russia the honorary title of Honored Inventor of the Russian Federation. The article about him is dedicated to the Day of Inventors and Innovators, which is celebrated this year on June 25th.

The Beginning of Glorious Deeds

Aleksandr Popov, a graduate of the Engineering School of Information Technologies, Telecommunications and Control Systems, began his career in the Scientific and Production Association of automatics named after academician N.A.Semikhatov, where he worked with the legendary constructor, whose name this Scientific and Production Association now has.

"Nikolai Semikhatov was a famous innovator-inventor and he encouraged inventive activity in every possible way. That is how I was inspired to be an inventor. I received my first certificate of authorship for an invention in 1970. All in all, I received 20 inventor's certificates of authorship during 11 years of my work in the Scientific and Production Association of automatics, including defense inventions. Five inventions were put into production and work for the country's defense, hopefully they still "fly and swim under water," and several more inventions were used in the metallurgical and construction industries and in transport," Aleksandr Popov says.

In 1988-2006 as General Director of Promavtomatika Plant Aleksandr Popov directed the implementation of automation systems for cold rolling mills, air cooling devices for gas-compressor stations, fan stations for subway and other important developments. By that time, Popov had already been awarded the "Inventor of the USSR" badge, medals of the All-Union Exhibition of Economic Achievements and other awards.

Best of the Best

For 15 years now, Aleksandr Popov has been teaching at the Department of Nuclear Power Plants and Renewable Energy Sources, the university's leading department in terms of the number of inventions. The number of inventions made by Aleksandr Popov individually and with his co-authors during his work at UrFU exceeded 60. One of his main tasks is to ensure the safety of nuclear power plants. Among his inventions in this field are devices for increasing safety at nuclear power plants, a system of emergency heat removal, for example, with the help of water-air aerosol, and technology for capturing water vapor from pipes of nuclear power plants and thermal power plants.

The project of passive thermoelectric power supply installations for the system of emergency heat removal from the fast neutron reactor, which was created in co-authorship by the Head of the department Sergey Shcheklein, Aleksandr Popov and Professor of the Department, former General Director of The Beloyarsk Nuclear Power Station Nikolay Oshkanov, was included among the best inventions of state corporation "Rosatom". The system is currently being tested and prepared for implementation.

At the Peak of Green Energy

Another main area of Aleksandr Popov's inventive activity at UrFU is the development of renewable energy sources: creating new types of wind engines, barren mini-hydropower plants, bioenergy plants for processing poultry and livestock waste into synthesis gas with obtaining valuable fertilizers, energy storage systems, etc. The purpose of these patent-protected inventions is to obtain electrical and thermal energy from local sources, which is indispensable for remote and not crowded settlements, for example, farms, fishing villages, geological parties.

In the same line is the development by Aleksandr Popov and Sergey Shcheklein of a mobile wave power plant that uses the energy of sea waves. The development was included by Rospatent in the list of 100 best inventions of Russia. The use of wave energy also allows to reduce the volume of imported and burned organic fuel and thus contributes to the development of the Arctic and eastern territories of our country.

Together with Sergey Shcheklein, a device was created for cleaning from water vapor of flue gases coming through the factory chimneys, pipes of nuclear power plants and thermal power plants.

"Installation of such a device on pipes does not require their reconstruction and changes in the technology of their use, while ensuring the maximum release of water vapor from gases, which bring significant harm to the environment. Suffice it to say that each ton of vapor released into the atmosphere is equivalent to the "greenhouse effect" of 360 kg of carbon dioxide," explains Aleksandr Popov.

Well, the most memorable event of last year was the decree of Russian President Vladimir Putin, according to which Aleksandr Popov was awarded the title of Honored Inventor of the Russian Federation for his many years of productive inventive activity. According to Shcheklein, this was a great gift for the Department of Nuclear Power Plants and Renewable Energy Sources for its 60th anniversary.

"Aleksandr Popov knows how to not only create, but also to make out competently his ideas and patents. He teaches the same at special courses on inventive activity to his students. Due to this, more than 20 of our students have registered their own patents," says Sergey Shcheklein.

According to Aleksandr Popov, the greatest inventive energy is shown by the students who are training to become nuclear power plant engineers under the mentorship of Oleg Tashlykov, Associate Professor at the department.

"Oleg Tashlykov is an active inventor and assigns his students specific tasks that the production process requires," notes Popov.

Aleksandr Popov explains his own uncommon inventive achievements by insight.

"Just as writers get plots and poets get rhymes, inventors get good ideas, and then it's a matter of technique - to write down the product of inspiration correctly," says Popov.