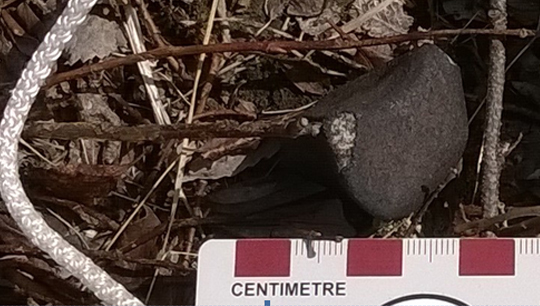 Today the scientists from Finland, Russia and Norway present the first fragments of the meteoroid that entered the Earth’s atmosphere above Kola Peninsula on April 19, 2014. The reporters of the international conference “Asteroids, Comets, Meteors 2014” held in Helsinki are Thomas Kohout (University of Helsinki, Finland), Maria Gritsevich (Department of Geodesy and Geodynamics, Finland, Ural Federal University, Russia), Victor Grokhovsky, Grigoriy Yakovlev (Ural Federal University, Russia). The results are of great interest, for it is the first time a meteorite was discovered by means of defining its coordinates on the basis of Finnish Bolide Group cameras data. Annama meteorite is one of 22 celestial bodies, the orbits of which were defined by means of registering their trails in the atmosphere before they fell on the Earth. The meteorites of such a kind play the key role in defining the way our Universe was formed, as well as in its evolution.

Kole bolide appeared in the night sky above the territory of Russia near the border with Finland. It was photographed in Kuusamo, Mikkeli and Muhos, Finland. Besides, there is free access to the video, made by Alexander Nesterov from the other side of bolide trail in Snezhnogorsk. The video was thoroughly analyzed. The bolide was bright so people in Russia, as well as in Finland and Norway, could notice it. Trajectory calculation and modeling of the dark phase of the flight was carried out by Esko Luutinens with his colleagues from Finland and Norway. It is estimated that the starting weight of the meteroide is about 500 kg.

Having analyzed the bolide, the scientists suggested that a part of it survived the passage through the atmosphere and fell down. That is why the international expedition was organized, aimed at finding the meteorite. The expedition members were Alexey Ishchenko, Nikolay Kruglikov, Grigoriy Yakovlev (UrFU), Thomas Kohout (University of Helsinki); the organization of the expedition was assisted by Maria Gritsevich and Victor Grokhovsky. 5-day expedition took place at the end of March. The first fragment of the meteorite was found by Nikolay Kruglikov on May 29, 2014. Not far from there the second fragment weighing 48 grams was found by Alexey Ishchenko on the forest road. It is possible to find more fragments in that area but there were many marches and lakes and it was very bushy, which made searching for the fragments difficult.

Now RAS Committee is preparing to apply to the international Meteoritical Bulletin. It is suggested that the meteorite should be called “Annama meteorite”, for it fell near Annama river.

Finnish bolide group is a network of scientists and amateur astronomers. It was formed in 2000. UrFU meteorite expedition group exists for 27 years and it is engaged with field work in different regions of Russia. UrFU scientists were the first to discover the fragments of Chelyabinsk meteorite which fell down on April 15, 2013.