Victor Grokhovsky: UrFU is the only university in Russia that can organize a meteorite expedition
More

Victor Grokhovsky: UrFU is the only university in Russia that can organize a meteorite expedition

University researchers will come to the Antarctic to discover meteoritic matter 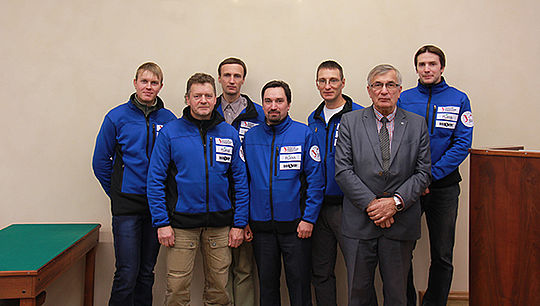 On December 16 researchers from Ural Federal University will start the first-ever meteorite expedition to the Antarctic in the history of modern Russia. In the South Pole the team plans to find meteorites and dust from Mars and the Moon.

According to the head of the expedition, UrFU professor Victor Grokhovskt, the Antarctic expedition is a complex and expensive research project, and not every university is able to organize it.

“For a long period of time Ural Federal University has carried out meteorite studies. For almost 30 years the only one student meteorite expedition in Russia has worked in the university. The studies of meteorite debris found are as well carried out in the laboratory in Ekaterinburg”, underlines Victor Grokhovsky. “Now we’re preparing to launch the first Master program in Russia in Space Mineralogy”.

According to Prof Grokhovsky the Antarctic is like a magnet for extraterrestrial matter. There are meteorites and dust from the Moon and Mars in the blue ice of the South Pole. The members of the expedition assure that they will share the results of their studies with their counterparts from other countries.

UrFU Antarctic expedition is the first research project in the history of modern Russia aimed at discovering meteorite matter in the southernmost continent made possible thanks to the university’s participation in the state-funded competitive enhancement project 5-100. The scientific supervisor of the project is UrFU professor Victor Grokhovsky, renowned Russian metallographist.

The estimated budget of the expedition is 8-12 million roubles; the major part of the funds for scientific research was granted by Ural Federal University. Efforts of UrFU Student Union helped to raise 500 000 roubles through crowdfunding; significant amounts have also been provided by the sponsors. For example, Plana, an engineering company from Ekaterinburg, supported the project with 1 mln roubles. Clothing for meteorite expedition members was made up by the local company Discovery, and food was provided by NL International.