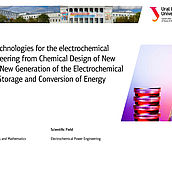 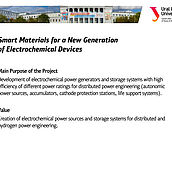 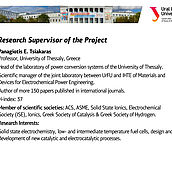 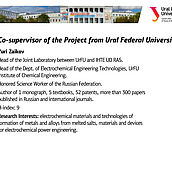 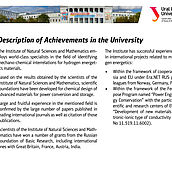 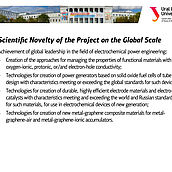 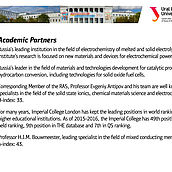 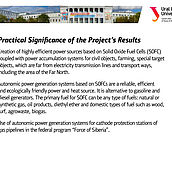 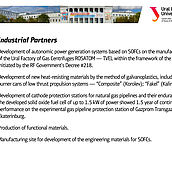 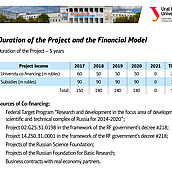 What is the key target of the project?

The key target of the project concerns the design and development of new materials and advanced technologies for electrochemical devices for energy conversion and storage. For example, advanced systems such as fuel cells, electrolytic cells, metal-graphene batteries, electrochemical storage systems and supercapacitors.

What main problem will be solved in the framework of the project?

We are optimistic that within the framework of the project we will have solutions for the different problems. For example, we will try to develop new materials with oxygen-ion, proton and/or electron-hole conductivity. We will try to obtain theoretical understanding of the processes and phenomena like mass, heat and charge transfer, or curing the abovementioned materials with oxygen-ion, proton and/or electron-hole conductivity and the devices based on these materials. We will also try to set new approaches for the extension of life and stability of new-generation electrochemical devices. We will also try to develop new fuel power plants and electrolyzers design and, finally, to develop a new generation of metal-graphene-oxygen, metal-graphene-ion accumulators based on new functional materials.

What scientific results will be obtained in the framework of the project?

In the frame of this project, yes, by achieving the project targets, we will provide considerable scientific results of high novelty. The results will be in the following fields. Firstly, in thermodynamics and kinetics of the defect formation in the new materials with high oxygen-ion, proton and electron-hole conductivity. Within the framework of the project, for the first time, theoretical foundations will be developed. These foundations will be based not only on phenomenological approach used in the literature, but also they will take into account the electronic and phonon structure of the oxide materials influence on the mechanism of the defect formation in wide range of temperatures in gas mixtures including highly reductive and oxidative atmospheres.

How do you plan to achieve these results?

First of all, this project is going to be realized within the framework of the Strategic Academic Unit called the Institute of Natural Sciences and Mathematics. This unit is placed at the Ural Federal University named after the first President of Russia B.N. Yeltsin. Second, and most important, I believe it’s impossible to realize such an ambitious project without partners. Let’s say, without support from Russia and from abroad, from Europe. From Russia, the project will be supported in terms of academic science, in terms of industry, in terms of education. Academic science, the Institute of High Temperature Electrochemistry, here in Ekaterinburg, is a leading organization in the field of high temperature electrochemistry. And Boreskov Institute of Catalysis in Novosibirsk is a leading organization in the field of catalysis. Regarding the industry, the Ural electrochemical integrated plant, which can provide the platform for the real high-tech manufacturing of electrochemical devices and storage and conversion of energy. And education, of course. In this case, the Department of Chemistry of Moscow State University will be the strategic partner in the field of electrochemistry and material science. Finally, we will have support from other laboratories from abroad, especially from Europe. My laboratory in my university in Thessaly, Greece, the University of Twente in Holland and the Imperial College in London, England. Collaborating, of course, with well-known specialists in the field of material science and engineering.

To tell you the truth, I believe that the above concertion constitutes a mechanism – I can call it “organism” also – of interaction between education, science and technology. And on the other hand, the whole team is actually international. In this concertion, the main role of the Ural Federal University concerns coordination by means of the joint UrFU Institute of High Temperature Electrochemistry, laboratory for materials and devices for electrochemical power engineering, which has been purposefully created for the ambitious project’s realization. Ambitious such as this project.

What is the practical significance of the project in Russia and in the world?

As of nowadays, more than half of Russian Federation territories don’t have central power supply. Among them, the Far East, the Arctic zone and the regions of the extreme north. In these regions, the population is more than 20 million of people. Their life sustenance is supported by means of facilities of small-scale energetics. It is well known that the priority of any powerful state is ensuring energetic safety for their population and power supply of domestic and industrial objects in Russia.

What is the breakthrough of your project?

The breakthrough in my research, yes. I’ll start from the research of last years in my laboratory in Greece, where we designed and developed new platinum-free and not expensive electrocatalytic materials. Especially nitrogen-doped- based materials, carbon-based materials, three-dimensional and two-dimensional, for the facilitation of mass transport and, of course, enhancement of the rates. But these materials could be used for the fabrication of low-temperature electrochemical devices, such as proton exchange membrane fuel cells, electrolyzers, glucose biosensors, etc.

Secondly, based on the previous experience in my laboratory in the University of Thessaly in Greece, and in the Institute of High Temperature Electrochemistry in Ekaterinburg, Russia, we designed and developed with my collaborators new proton-conducting materials based on barium cerate and barium zirconate. These materials will be used for fabrication of more efficient electrochemical devices – fuel cells, electrolyzers, etc. We are also developing solid oxide electrochemical reactors that could be used for the production of useful chemicals, giving the additional value in carbon dioxide, nitrogen etc. For example, from carbon dioxide we can, by reduction of carbon dioxide, we can use ethanol, methanol, methane – all from nitrogen-hydrogen ammonia synthesis. Given that the most of abovementioned devices consist of electrodes, on the surface of which the electrochemical reaction takes place, we were all these years very much interested about the nature of the active sides that could promote and enhance the reaction rate. Speaking about oxidation of the fuel and the reduction of oxygen and about the selectivity and the stability of those catalysts.

What important technology can be foreseen?

The following achievements may be reached in several technological fields. Regarding technology of power plants based on fuel cells of tubular design with characteristics at the level of or exceeding ones of similar devices based on other fuel cell designs. Technology of highly effective electrode materials for electrocatalysts with characteristics higher than that of the world-class or Russian-class analogous devices, and with long lifetime to be used in the electrochemical devices of new generation. Finally, a technology of new metal-graphene composites for metal-graphene-air and metal-graphene-ionic accumulators.

You are the academic supervisor of this project. Could you tell us a few words about yourself?

Yes, I didn’t mention, but I really am the academic supervisor. Yes, I can tell you a few words about my, let’s say, scientific life. The last 25 years, I’m the professor at the Department of mechanical engineering in the University of Thessaly in Volos, Greece. Since 1995, I’m the director of the Laboratory of Alternative Energy Conversion Systems. And the last 3 years, I’m the supervisor of the Laboratory of electrochemical devices based on solid electrolytes at the Institute of High Temperature Electrochemistry here in Ekaterinburg, Russia. During these years, I was mainly involved in the fields of electrochemical catalysis, solid state electrochemistry, design and development of electrochemical devices for energy conversion, storage and for medical purposes. As of today, I still have the opportunity to strongly collaborate with many important research and development organizations worldwide – in Asia, Europe, South Africa and USA. 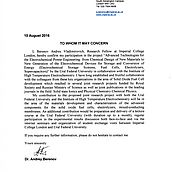 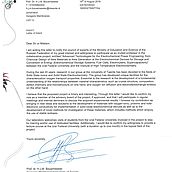 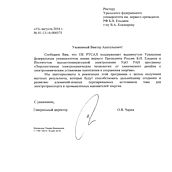 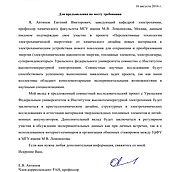 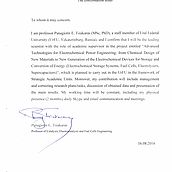