Development of new functional materials based on low­-dimensional carbon modifications 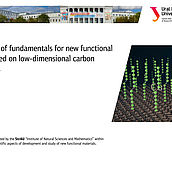 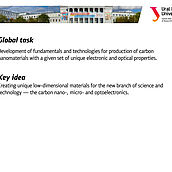 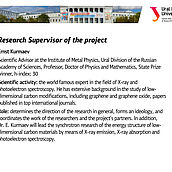 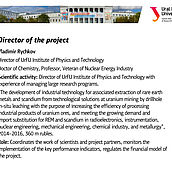 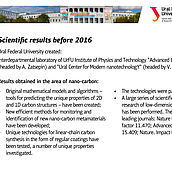 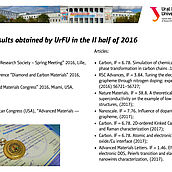 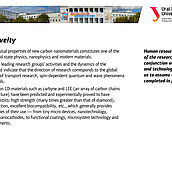 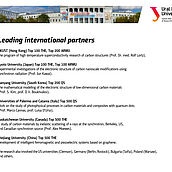 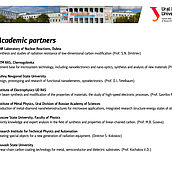 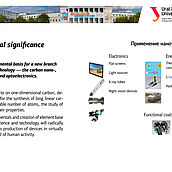 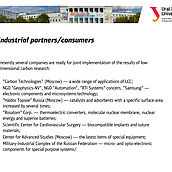 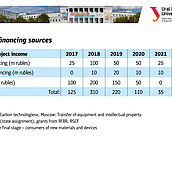 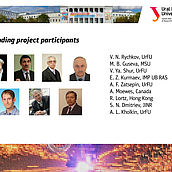 Anatoly Zatsepin, one of the project’s leading participants, head of the Interdepartmental Laboratory of the Institute of Physics and Technology

Can you tell us what the main point of your project is?

The main point is that we decided to lay the foundation for a new branch of science and technology: carbon nano-, micro- and opto-electronics. About 15 or 20 years ago, nobody could even think that electronics, or microelectronics, would someday reach a limit. Modern electronics is, first of all, silicon-based electronics.

The thing is that silicon is one of the most widespread elements in the Earth’s crust, and it’s quite cheap, too. Plus, the technology for its production and use has been mastered to perfection. However, there is such thing as the Moore’s law in electronics, which states that the number of functional elements on an integrated microcircuit doubles every 1.5 years. Today, an average transistor (the main functional unit of an integrated circuit) is 15 to 20 nm in size. If we reach sizes below 10 nm, the Moore’s law will stop working, which will mean the end of silicon electronics. It will be the limit where neither speed of all those elements, nor the miniaturization will be able to produce the effect that engineers and scientists are looking for. We are observing a situation where we can fill a vast number of active functional elements into a very small space. And there’s only one solution: silicon electronics is going to be replaced by carbon electronics.

However, one of the problems is that, after some point in decreasing the size, electronic components also stop working as fast-speed systems, because no matter how small functional elements are, you still have to attach conducting wires to them. So, the losses and the speed of such systems are, as a rule, restricted by the current flow in those conductors. The only solution is that we have to use optical connections between functional elements, and so regular electronics is to be replaced by optoelectronics, or photonics.

What have you achieved so far?

Well, firstly, we have advanced quite a lot in terms of forecasting: we conducted quantum calculations, which help to predict the unique properties of different modifications of the materials. In particular, there are prospects for production of high-temperature superconductors based on our materials. Many research organizations are now struggling with this. The difficulty is that the superconductivity has to be reached by technically simple operations and in high enough temperatures. The theoretical models that we developed show that we can control the temperature of phase transition into the superconductive state modifying the nanostructure.

Secondly, we have developed control methods. Since those are low-dimensional modifications, and they are quite diverse, it is necessary that we can identify them precisely. It means that, after synthesis of a material, we must be sure that it is exactly the material we need before continuing research. Methods for control and characterization involve the use of spectroscopic equipment and quantum computer calculations.

Thirdly, we have launched a setup that is used for experimenting with creation and modification of structure and properties of the new carbon nanomaterials.

Fourthly, we have obtained new information on the optical properties of those materials. That information is experimental — and it shows that the properties go beyond what we had known before. There is a concept of “ideal black body” in physics. Certain modifications of the materials are able to absorb all kinds of radiations in broad wavelength range of electromagnetic spectrum, which is not typical.

Where have you presented the results of your research?

We have a list of publications in highly ranked international journals, for example, two recent papers have been published in “Carbon” journal, some in Nature Materials which has extremely high impact factor.

Our results are being regularly reported at the significant international events. Last year we have participated in three very important conferences: International Conference on Diamond and Carbon Materials, Spring Meeting of European Material Research Society, and the American Advanced Materials Congress — we were awarded a medal there, which means that we are moving in the right direction.

How does your research compare with the global achievements?

Our project covers many different fields, but the central focus is on the research of different varieties of low-dimensional carbon modifications, which are chained structures of carbon. In the last 20 years, three Nobel prizes were received for discovery of fullerenes, carbon nanotubes, and graphene.

The materials that we are working with in our laboratory are not just chained structures of carbon, but structures of high diversity on the nanoscale, which can be used to produce various functional elements in the form of rings, films, or layers.

This kind of materials has not been thoroughly studied yet. The chain structures of carbon were discovered in the previous century, but, for various reasons, they were not studied very deeply. Today’s needs, however, are forcing us to bring this research to the forefront. We hope that the results will be very significant.

Are your technologies in demand in the global market? What is the general significance of the project for the industry?

Our main aim is the development of new technologies. Although we already can produce the materials, there is still a long way to go, and the most important thing here is that we have achieved a scientifically based forecast on what kind of materials they will be and what structure and properties they will have. Those methods show that we can produce materials with properties many times exceeding the whole complex of known physical properties of materials. I am talking about all known carbon materials. For example, everyone knows that diamonds are very solid. In nature, there are certain modifications of the materials we are forecasting and, in particular, the ones that we are already studying on the nanoscale. The data we have obtained shows that such materials are several times more solid than diamonds.

Let us consider, for example, medical application of these materials. They demonstrate unique biocompatibility: various implants covered in this material and introduced into a human body do not show any signs of rejection after several years of functioning and are perceived as natural tissue.

Speaking about 5 to 10 years’ future of the industry, what role does your project play in it?

As I said, we are laying the foundations by developing the basic physics for the element base of a new branch of science and industry: carbon micro-, opto-, and nano-electronics. What we are going to see next is a new technological revolution. If there is demand for what we are doing and it is someday introduced into the real life — not only the performance of supercomputers, but also the micro-miniaturization that we can only dream about now — then I cannot imagine an area of human activity where we won’t be able to apply it. Power industry is a good example: it will be possible to create almost perpetual nuclear batteries.

Who is involved into the project?

Within this project, I act as the head of the Interdepartmental Laboratory of Advanced Carbon Materials, Institute of Physics and Technology. The laboratory employs people from several departments of the Institute, and our staff includes young students and postgraduates as well as scientists.

Along with the Institute of Physics and Technology, the Ural Center for Collective Use “Modern Nanotechnologies”, headed by Professor V. Ya. Shur, will actively participate in the project.

The scientific manager of the project is Prof. Ernst Kurmaev, scientific director of a department at the Institute of Metal Physics, Ural Division of the Russian Academy of Sciences, doctor of physics and mathematics, USSR State Prize laureate. He is a renowned expert in studying electronic structure with the use of x-ray spectroscopy and synchrotron radiation.

The head of the project is Prof. Vladimir Rychkov, director of the Institute of Physics and Technology, a person with great experience in organization of research with strong inclination towards practice. He coordinates all the groups in the project: technological, electronic properties, theoretical, and also the groups of optics and spectroscopy.

Who are the partners of your project in Russia and abroad?

In Russia we collaborate with many scientific and industrial organizations, including the Joint Institute for Nuclear Research in Dubna, Flerov Laboratory of Nuclear reactions, and Moscow State University, which initially had the idea of creating the material, and we took up the initiative.

There are also many well-known universities in Russia and in other countries. For instance, we have a young doctor from Hong Kong University of Science and Technology, which is in the top 100 of all universities in the world.