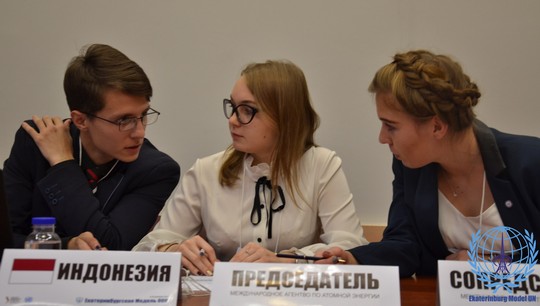 On December 8-10, the V Ekaterinburg UN Model took place in the University. Future diplomats and specialists in international relations tried to role-play the work of the organization by representing different UN Members. Delegates, chairmen and experts were discussing and trying to resolve some important Global problems such as cyberattacks, arming, and Iranian nuclear program.

‘I`m glad to be involved in the UN Model systems and we can observe their dynamic development in many cities of Russia,’ said 3rd Secretary of The Ministry of Foreign Affairs of the Russian Federation in Ekaterinburg Mikhail Kosarev, ‘Probably, the uniting factor of all the participants of Ekaterinburg UN Model is the desire to find common language. The importance of this fact can scarcely be overestimated. Our Minister of Foreign Affairs Sergey Lavrov repeatedly highlighted that many current problems are coming from unwillingness to listen to each other. I wish to all the participants of this Model to come to an agreement. They should understand that in few years’ time they will be in charge of decision-making including the foreign policy and they will have to resolve the problems which experienced politicians are unable to resolve.

In the end, all members adopted resolutions stating some solutions to agendas. Later the organizers will send the documents to the UN Secretariat.

It should be noted that UN Modelling is a popular event that has been taking place in different cities for almost 60 years.