The University Will Become a Scientific, Educational and Innovative Center
More

The University Will Become a Scientific, Educational and Innovative Center 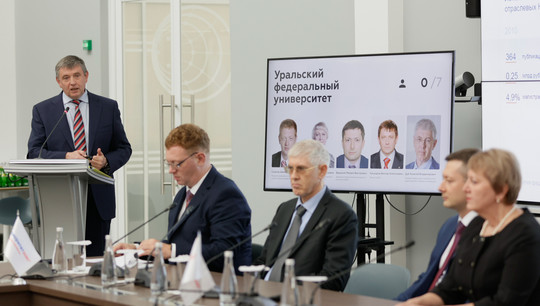 The team of Ural Federal University presented the development program in the "Research Leadership" track of the Priority 2030 program. By 2030 the university will become a scientific, educational and innovative center of international level, focused on research and technology implementation.

The Council for Support of University Development Programs was organized by the Russian Ministry of Education and Science. The Commission was chaired by Russian Deputy Prime Minister Dmitry Chernyshenko. In the "Research Leadership" track, 18 higher educational institutions are claiming for the special part of the grant in the amount of up to 1 billion rubles.

"Priority 2030 project surpasses all previous educational programs in its scale. The program has already attracted 106 participants from all federal districts of the Russian Federation. The universities whose development programs go beyond the usual models made it to the second stage of the selection process. After a successful defense, they will receive a special part of the grant, the amount of which may reach up to one billion rubles a year. We expect the winning universities to become anchor points of scientific and technological development on the map of Russia," Chernyshenko noted.

To achieve leading positions, UrFU has planned the implementation of five strategic projects in digital technologies and new materials, environmentally friendly and resource-saving energy, and in the area of effective interaction between people, nature, and technology.

"The Materials and Technologies for Hydrogen and Nuclear Power Engineering project will develop new technologies for solid oxide fuel cells and electrolyzers based on high-purity oxides of rare and rare-earth elements. Comprehensive solutions for the production and storage of hydrogen on an industrial scale will be created by 2030," said Victor Koksharov, the Rector of Ural Federal University.

According to the head of the university, the project "Design and Technology of Functional Materials and Systems" is aimed at achieving leading positions in three areas: functional materials for magnetic sensorics, spintronics and magnetomicroelectronics; highly selective materials for detection equipment and medicine; organic and hybrid materials for diagnostics and therapy of socially significant diseases.

The project "Human well-being in the conditions of digital transformation" will create a replicable model of digital transformation of the subject of the federation and special applications to balance the introduction of advanced technologies, the tasks of sustainable development of the territory and the psychological well-being of the population.

The Academic Excellence project will combine the resources of UrFU, academic and industrial partners to conduct world-class research and create high-level technological solutions. The "Personnel for Scientific and Technological Breakthrough" project is aimed at providing highly qualified specialists for the research and high-tech sectors of the economy.