Amino acid can be used for biomedical purposes 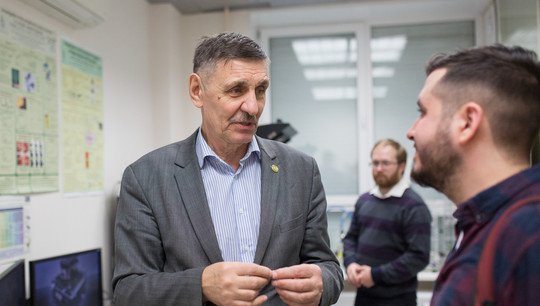 A group of scientists from the Ural Federal University and the Weizmann Israeli Research Institute are close to creating piezoelectric elements compatible with the human body from glycine crystals. The research project “Pyroelectric and Piezoelectric Properties of Doped Biomolecular Crystals” was supported by the Russian Foundation for Basic Research and the Ministry of Science and Technology of Israel (the grant is designed for three years). Some of the latest findings from the research team are presented in Sensors and Actuators A: Physical.

“Professor Igor Lubomirsky, under whose leadership crystals are grown in Israel, is a world-renowned specialist in the doping of amino acid crystals,” says Andrei Kholkin, head of the laboratory of nanoscale ferroelectric materials at UrFU. - Beta-glycine, the phase of glycine that we have to work with, is unstable, but through a directed improvement in the properties of amino acids, our colleague manages to stabilize beta-glycine and grow large crystals. This is possible thanks to the use of various dipole additives. Due to the difference in the dipole moment of the “guest” and the replaced molecules, the introduction of the “guest” into the lattice of the host crystal locally distorts the “receiving” medium and turns non-polar crystals into polar ones with controlled properties.”

The task of physicists at UrFU is to measure how dipole additives and temperature changes affect the molecular environment. The goal of the project is to achieve the highest efficiency of glycine molecular crystals, so that with a small impact a maximum response occurs, from 10 volts and above.

“I emphasize that our Russian team is one of the world leaders in researching the properties of functional materials, including organic and biomolecular ones, using scanning probe microscopy. The Center for Collective Use “Modern Nanotechnologies” is equipped with a special room isolated from noise and vibration, and a unique device - a laser interferometer, which is assembled with our hands and allows us to measure strains accurate to atomic fractions,” says Vladimir Shur, UrFU, Director of the Center for Modern Nanotechnologies.

The success of the project will open up new possibilities for using crystals of glycine and other amino acids as functional biomaterials - in particular, as power sources for pacemakers, as well as in the treatment of brain diseases, for example, Parkinson's and Alzheimer's diseases.

Glycine molecules can also be useful in solving the problem with artificial implants. The simplest amino acid is known as a sedative and antidepressant. And scientists propose to cover implants, replacing "out of order" bones and joints, with glycine molecules. Implants made from inorganic materials are often rejected by the human body as foreign, and the use of glycine as a coating provides two important advantages. Firstly, glycine is an organic compound and, therefore, compatible with the human body. Secondly, glycine crystals are pyroelectrics and piezoelectrics: they generate an electric charge with a change in temperature and with mechanical deformation and, conversely, are deformed in an external electric field.

“Many organs, including bones, are themselves piezoelectrics, so when a person moves, for example, when walking, an implant coated with glycine can help them generate electricity and, thus, contribute to the healing of injuries of the musculoskeletal system,” commented Vladimir Schur.

A glycine molecule - made of carbon, hydrogen, oxygen and nitrogen - is the smallest of all amino acids. Glycine is called the "molecule of life": it is believed that where there are glycine molecules, organic life is present. It is known that glycine was found in interstellar dust and in a gas cloud around the comet Churyumov-Gerasimenko. And this is another argument in favor of the hypothesis that life on Earth is brought from outer space.