The research uses a model with increased calculation accuracy 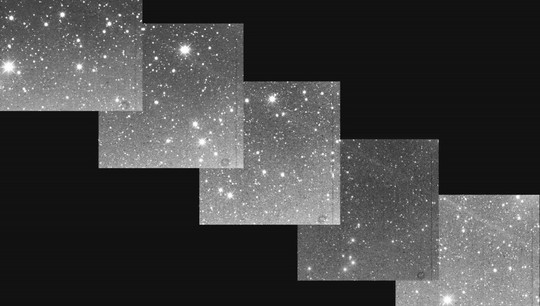 Photographs of observations of the comet in 2015 taken by researchers. Photo: Arto Oksanen

Researchers from Russia, Finland and Canada have identified an unusual, hourglass-shaped dust trace of comet 17P/Holmes. The particles that formed the trail were emitted as a result of the most powerful comet outburst documented, which occurred in October 2007. The calculation method created by the research group will help, among other things, to predict the occurrence and intensity of meteor showers.

An article describing the research and its results was published by the authors in Monthly Notices of the Royal Astronomical Society, one of the world's oldest and leading scientific publications on astronomy and astrophysics.

Actual observations of the comet were made using telescopes installed in Australia and the United States. The first phase of observations began in February 2013 and continued in the years 2014-2015. The second phase lasted for a year from September 2020.

Using observations, the authors of the article for the first time established that the set of orbits of the comet's particles ejected by the flare has the shape of an hourglass. On opposite sides there are areas of convergence of the orbits along which the particles move (such areas are called nodes). One, the northern node, is located at the comet's outburst point, the other, the southern node, is on the other side of the Sun. The smallest particles have the largest orbits, so they are the last to the nodes; medium- and large-sized particles reach the nodes earlier.

"The enormous amount of particles that were ejected from the comet during the outburst spread out in elliptical orbits around the Sun. This provides a unique opportunity to study the cometary material and its dispersion in interplanetary space. To understand the physics and scale of the ejection phenomenon, we developed a new model to realistically describe the evolution of the resulting cometary dust trails," explains Maria Gritsevich, academic project leader, assistant professor at the University of Helsinki and senior researcher at the Finnish Geospatial Research Institute and Ural Federal University.

The model described the motion of particles ranging in size from 0.001 mm to 1 mm, the particle ejection velocity, depending on their size, from smaller to larger, was 640 m/s and below.

"Since 2000, I have been modeling well-known meteor showers (such as the Leonids) using modern modeling techniques. In this study, we have developed high-precision models of the outburst of comet 17P/Holmes and the propagation of the resulting dust trace particles ourselves. Moreover, we combined both models for the first time and this resulted in a powerful new model," says Markku Nissinen, a member of the Finnish Bolide Network at the Ursa Astronomical Association.

The uniqueness of the model is that it takes into account the effects of solar radiation pressure, gravitational disturbances caused by Venus, the Earth and the Moon, Mars, Jupiter and Saturn, as well as the gravitational interaction of dust particles with the parent comet.

The researchers modeled two variants of the motion of particles ejected into space by a comet outburst. In one case, the particles flew in different directions; in the other, they flew only toward the Sun, the source of the main influencing forces. The first model involved 2000 particles, the second 800. The simulations showed that the orbits of the particles take the form of an hourglass only in the first case. In other words, during the outburst of the comet in 2007, the particles formed a dust trail, dispersing in different directions.

"At first, it was as if they had dissolved into outer space. However, we found that the particles converged again in the knots of the dust trail," notes Maria Gritsevich.

The results of the research allow predicting the location and behavior of the dust trace of comet 17P/Holmes, including on the way to and at the flash point in 2007. In addition, the studies will help to make effective calculations for the next similar event.

"The Earth crosses the orbital plane of a given comet twice a year, the optimal observational geometry of the trace is provided in February and August. Particles of other comets often enter the Earth's atmosphere as meteoroid streams, and then we observe them as meteor showers. Using our model, we can predict the timing and intensity of their occurrence," explains Gritsevich.

The research is supported by the Academy of Finland. Scientists will continue to study comet 17P/Holmes to determine the reasons for the periodic increase in brightness, the effects of secondary and seasonal factors (such as non-gravitational and irregular sunlight pressure) on the particles, and the possibility of observing in the infrared wavelength range. In addition, future research plans are to simulate the first observed comet outburst in 1892 and its consequences.

"We predict that with our published data on the time of arrival and the corresponding coordinates of the dust trace of comet 17P/Holmes in 2022 it will be visible even in the telescopes of amateur astronomers. We expect that the results of their observations will provide additional information about the number and size of particles and their distribution. This information will be useful for building new models and understanding what happens to the comet and its trace", concludes Maria Gritsevich.

Comet 17P was discovered during an outburst on November 6, 1892, by the British astronomer Edwin Holmes. Another powerful flare occurred on October 23-24, 2007 and lasted about three hours. The particle outburst that followed was the largest ever recorded from an astronomical observation. Due to a multiple increase in the size of the surface reflecting the sunlight, the brightness of the comet increased by 1 million times. For a time, the comet became the most visible object on the celestial sphere for Earthlings.