Scientists Systematize for the First Time All the Halo Discovered
More

Scientists Systematize for the First Time All the Halo Discovered 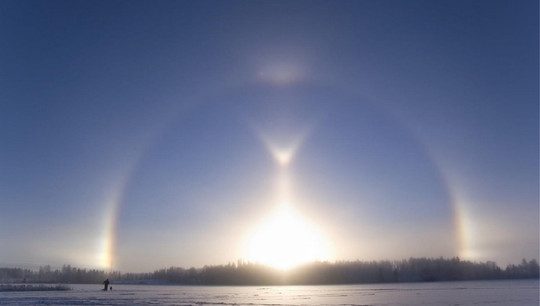 Scientists at the University of Helsinki and Ural Federal University Jarmo Moilanen and Maria Gritsevich have systematized information on all forms of atmospheric halo recorded by mankind at the end of 2021 for the first time in the history of observations. From numerous data sources of halo observations dating back 4-5 thousand years, 119 different forms of atmospheric halo are currently known (there are also extra-atmospheric halo and halo that can be discerned on various surfaces). An article describing this research and its findings was published in the Journal of Quantitative Spectroscopy and Radiative Transfer.

The scientists' work made it possible to summarize all the accumulated knowledge about atmospheric halos and review the conditions (temperature, humidity, etc.) necessary for the formation of ice crystals or other minerals in the atmosphere that scatter light and thus participate in the formation of a halo. In addition, the authors of the article outlined the gaps in the research of atmospheric halos and promising methods of observations and processing of the data obtained. These include new methods of digital photography, which are used to improve the quality of documentation of atmospheric halos and lead to the discovery of their new forms.

Scientists have grouped atmospheric halos into categories of frequently observed and rarely observed. It is considered that if a certain form of halo is observed at least once a year, it belongs to the first category; halos with a rare configuration of light sources, orientation or unusual crystal shape account for only about 1% of all observed halos.

Often observed halos are usually formed by scattering, refraction, and focusing of light by hexagonal ice crystals with a disordered, horizontal or vertical orientation. The main sources of light that cause halo are the Sun and the Moon, as well as artificial sources. Rare halos, though, are subdivided into those whose origin is established, and those not yet sufficiently studied and not yet easy to simulate are exotic.

"Typically, halos are formed by the interaction of light with hexagonal crystals of water ice. However, some of the documented, exotic, halos cannot be explained in this way. For example, the mysteries of the origin of some elliptical and circular halos have not been solved since they were discovered in the early twentieth century. Among the mysterious ones is the so-called Moilanen arc, which I first recorded in 1995," says Jarmo Moilanen, co-author of the article, a researcher at the Finnish Institute Geospatial Research and a PhD student at the University of Helsinki.

In the case of exotic halo, science presumably deals with abnormal crystal shapes (e.g., cubic water ice crystals), with their heterogeneity, or with crystals of some other minerals scattered in the air. However, what exactly should be ice crystals and ray paths that pass through these crystals to form a halo of this or that exotic shape is still unclear.

"Researchers speculate that the unusual shape of the exotic halos is due to anthropogenic factors, such as atmospheric emissions or the influence of the strong electromagnetic field of high-voltage power lines, which can disrupt the orientation of ice crystals in the air. To solve such mysteries, samples of ice crystals forming exotic halos were specially collected in the atmosphere, but this experience also led to more questions than answers," emphasizes Maria Gritsevich, Associate Professor at the University of Helsinki, Senior Researcher at the Finnish Institute Geospatial Research and Ural Federal University.

"This observation proves that clouds of hexagonal crystals of water ice, or other minerals, exist in the atmosphere of Mars. There is also speculation that halos could have been formed by transparent and optically sufficiently hard carbon dioxide crystals. Computer modeling of factors, in the presence of which halo formation is possible, will provide valuable information about the state of Mars atmosphere," adds Maria Gritsevich.

Halos can be observed with the naked eye at all levels of the troposphere which are the lower layers of the atmosphere 8-18 km high. Halos are most often seen in high ice clouds: in mid- or low-level clouds, ice crystals are often too weak optically to create a halo. Most of the best halo observations were in clouds of the smallest ice crystals in the surface layer of the atmosphere called diamond dust.

The oldest records of halo are between 4,000 and 5,000 years old: information about halo is recorded on cuneiform tablets of the Sumerian-Babylonian culture. At least three forms of halo were known at the time of Aristotle. One of the oldest observations of halo in Jerusalem dates to the beginning of the XII century. By 1820 the number of halo sightings was about 20, by 1990 it was 60. Since then, the number of recorded halos has doubled and now stands at 119.

Significant progress in documenting halos has occurred due to the popularity of mobile phones with photo and video cameras. The authors of this article encourage the general public to record observed halos and thereby contribute to the research of these phenomena and to the discovery of new ones. Thus, the launch of an automatic camera in Paris in the early 2010s gave an idea of how outdated the previous statistics are: it turned out that some halos, which were considered extremely rare, are much more common.

The rapid increase in the number of new halos in 2007-08 and 2016-17 (a total of 24 new halos) is largely due to an active "halo hunt" by enthusiast Marko Riikonen, who photographed halos formed by ice crystals created by snow guns at ski resorts in Finland.